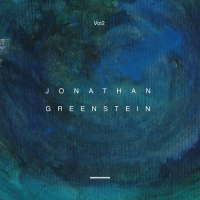 The title is plain as can be, the vaguely ECM-ish cover is pretty in its simplicity, and the playing follows suit—not plain as in bland or boring, but in an honestly straightforward manner with a minimum of fuss. Jonathan Greenstein ascribes an "anti-hero nature" to his voice on saxophone, which simply means that he doesn't need to be big, colorful and out in front. This is a player who takes after the John Coltrane of "Naima" rather than the Coltrane of "Impressions."

The short-but-sweet Vol 2 has the easygoing feel of drifting away from the party to have a nice quiet chat out on the back deck. Greenstein isn't opposed to a brief touch of swagger (such as in a piece named for fellow understated-saxophonist Dayna Stephens), but his expressiveness largely lies in inhabiting and conveying the evocative melodies themselves. His fellow players show the same class and taste; the rhythm players lightly bounce and swing while the piano and electric keys shade in the gaps with a soft wee-hours blue.

Each track creates an inviting and contemplative mood in the tidy framework it has. The calming, vaguely Latin groove of "Retrograde" makes the highlight here, while the pieces around it are as placid as the last set-ending wind-down before the place closes for the night. It's a contemporary mode of cool jazz that doesn't bowl you over or even try to grab your attention. Greenstein is confidently assured enough to sit and wait, knowing there's a worthwhile experience to share with listeners willing to meet him halfway.

Track Listing: Once You're There (Take Your Time); HelpDaynaStephens.Org in Gm, part 1; Bittersweet Jelly (Why Is It So Easy to Love); Retrograde; People Like Them.