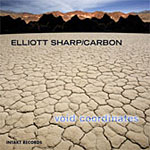 This is a reconvening for Elliott Sharp and his cohorts in Carbon—a band that spanned the period between 1991 and 1996—but anyone familiar with the guitarist's work will quite rightly take it for granted that this reunion has not resulted in the same old same old. If it has, in any degree, it's only as a result of familiarity. None of the music is an outgrowth of the tried and trusted, and indeed its sometimes indeterminate nature might be symptomatic of re-acquaintance manifesting itself in both new and previously unresolved tensions.

This is a band that deals in post-rock, including the negative connotations of that term, as much as it does anything closer to the continuum of creative improvised music. Thus, the blank riff of "Eukaryonic," devoid of all progression and sense of momentum, comes on as a step too far for metal bands of all persuasions. The music's denseness—metallic and percussive—is an incarnation of minimalism that reaches out beyond the audible lack of resolution to a place where established values are not so much subverted as bypassed.

The stealth of "Index of Minerals" could almost be the work of a different band if it wasn't for the music's essentially static nature. The harshness is tempered, though, by a reflective air and an apparently shared affinity for not rending the moment. Sharp and harpist Zeena Parkins map out territory that's the preserve of insects both real and imagined, before the galumphing of bassist Marc Sloan and drummer Joseph Trump undermines the impression and group's take on electronica becomes clearly, infinitely shaded.

By comparison "Hypercubus" is alive with rhythmic subtleties for all the pounding of Trump's bass drum. As a soloist, Sharp has long since mapped out his own territory in the realm of free guitar; here, the ferocity of his take on the art of rhythm guitar playing is as close to unique as anyone out there. There's a common mindset between his melding of strings, and the playing of Parkins and Sloan, but Sloan's sampling adds that crucial extra layer.

"Caldron" is the antithesis of a lot of the rhythmic subversion on offer throughout the rest of the disc. Gaudily, perhaps paradoxically "tribal," the outcome is all too earthy, and not in a good way. Still, the washes of sound—not the least of them being Sharp's out-of-Lol Coxhill soprano sax—carry the day in a rare instance of palpable evolution.