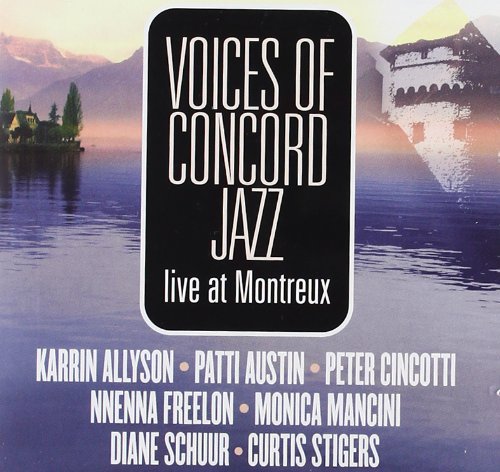 There is nothing better in music than a great vocal performance. With the advent of multi-track recording, singers can have many tries in the studio to fix or tweak their performance, thus ensuring a top of the line performance, but sometimes, the outcome loses immediacy and intimacy. This live collection of varied singers who have at one time called Concord their recording home, removes the safety net and puts these highly respected group of modern singers on one of jazzes greatest stages, the Montreux Jazz Festival from July 2003. What has been collected on this two-CD package are great performances that are honest and harkens back to the days of Holiday, Sinatra and Horne in their heyday.

The collection includes two and three performances each by Peter Cincotti, Karrin Allyson and Monica Mancini on the first disc and Diane Schuur, Curtis Stigers, Nnenna Freelon and Patti Austin on the second disc. Also included on the second CD is an ensemble performance of “How High the Moon.”

The first disc revolves around the intimacy of a small jazz combo surrounding the vocalist. The three singers step up the occasion and do not disappoint. One of the many highlights from this eight song CD lies in Monica Mancini’s “Dreamsville” where she duets with Curtis Stigers and features Dave Samuels on vibraphone and Tom Scott on saxophone.

The second disk revolves around the seventeen-piece WDR Big Band that is led by Tom Scott and features drummer Gregg Field (who is also credited with producing this project). The vocalists on this recording pick up where the others left off and do not disappoint. Each of the four vocalists and the ensemble of all the singers leap out of your speakers with the world-class delivery that you would expect. But to pick one highlight from this twelve-track CD, it would be Diane Schuur’s duet with Karrin Allyson on the Barry Manilow penned “Stay Away From Bill.” This track exudes class and elegance—pure magic. What keeps this recording so cohesive is that the WDR Big Band nails each song with the precision of a great Ellington or Basie big band. The sound is big and euphonic, a true bonus to the featured vocalist.

Where this two-disc recording falls short lies in the package. For a recording that is celebrating a label’s 30th anniversary in such grand style, one would think a nice essay celebrating the event and the label history along with several photos from that show—neither is present and it is very much missed. In addition, there is a companion DVD of this very performance, which maybe the CD would have been better served with a sample or two.

Overall, since the music on any recording should serve as the reason why a record should be purchased and this multi-artist performance is worthy of being an addition to your collection—great live/‘in the moment’ performances by the best vocalists of today celebrating a great milestone on a tremendous stage.