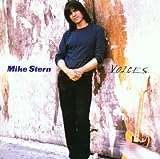 Mike Stern has had the makings of Voices within him for quite some time. Only now has it come to the surface. Voices is his tenth recording for the Atlantic Jazz label. With Voices, Stern has poised himself for popular (i.e. commercial) acclaim. Always a critical darling, Stern has remained somewhat unknown to the CD buying public. If you hadn't been turned on to his music, he flew under your radar.

Much like Carlos Santana did with Supernatural, Stern is re-inventing himself with Voices. The purpose of this CD is to bring Stern a wider audience. It does! A technical genius, whose phrasing and sizzling guitar riffs have made him a much sought after jazz-rock-fusion guitarslinger, Stern has appeared on albums by an eclectic group of artists. The Brecker Brothers, Steps Ahead and Miles Davis to name but a few, have all benefited from Mike Sterns guitar wizardry. Stern was also a member of Blood, Sweat & Tears.

With Voices, Stern has taken his remarkable six string pieces and meshed them with vocals. These vocals are supplied by, among others, Elizabeth Kontomanou (on "What Might Have Been"), Arto Tuncboyaciyan and Philip Hamilton, formerly of Full Circle, and Richard Bona (who layers his voice many times over to create a kind of Choir on the album's opener "One World."

Other highlights include "The River" also sung by Bona, "Slow Change" "Way Out East" and "Spirit" with its African groove and wonderful atmospheric sound.

Voices is much more than just the new Mike Stern CD. It is a celebration of music and the feelings that music (and vocals) can convey. Stern, along with guest musicians Michael Brecker and Bob Franseschini on saxophones, Dennis Chambers on drums , bassist Chris Doky, drummer Vinnie Colaiuta, Jon Herington on guitar and Lincoln Goines on additional basses have created a vibe that is both inspirational and uplifting.

If you don't know about Mike Stern, Voices is a good place to learn. You'll then find yourself buying this Grammy-nominated guitarist's other recordings like Play (his last CD), Upside Downside, Standards (and Other Songs), Give & Take and Time In Place. If you have his other CDs, Voices is an evolution of sorts — get it and grow with him.