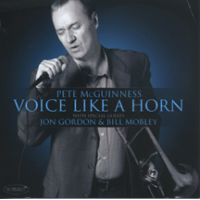 "Did you hear the one about the singing trombonist?." It's not even a joke because there have been many a fine trombonist that also sing, to wit: beginning with the inestimable Jack Teagarden. Then there's Billy Eckstine, Wycliffe Gordon, Henry Darragh, Natalie Cressman, and one Pete McGuinness who releases his third recording as leader, Voice Like A Horn. It is McGuinness' vocal abilities that are showcased on this recording, where the singer is supported by a piano trio augmented with special guests.

McGuinness is best known for his association with the Pete McGuinness Jazz Orchestra, whose First Flight (Summit, 2007) was roundly well received at All About Jazz. McGuinness has appeared as a sideman on some forty recordings and has sung with the likes of the Jimmy Heath Big Band and the Manhattan vocal project.

Voice Like A Horn is made up of a single original and seven standards that showcase McGuinness' curious vocal cross of Chet Baker's vibrato-less delivery coupled with Kurt Elling's fearless attack on convention. All selections were given ample time for development, the lion's share being five minutes or longer. The disc opens with Jerome Kern's "Yesterdays." McGuinness opens fire with a machine-gun scat that could light a fire over a thundering piano support. A good start, to be sure. Both "Oh, You Crazy Moon," featuring the set's best ensemble arranging, and trumpeter Bill Mobley's "49th Street, which allows McGuinness to properly demonstrate his scat prowess, find the trombonist joined by the trumpeter and saxophonist Jon Gordon.

Dizzy Gillespie's minor blues, "Birk's Works," join "49th Street" as a scat showcase, McGuinness' delivery is as smooth as a single malt, neat, recalling the vocal calisthenics of Lambert, Hendricks & Ross. Bassist Andy Eulau has his best solo, extended between the scat singing. McGuinness turns in a performance of "Tea For Two" that rivals that of Anita O'Day at Newport, 1958. His delivery is precise at speed and speed is the key operative. Voice Like A Horn has many charms and should appeal to a broad jazz listening public. McGuinness might prove to be the next thing in male jazz vocals, an area needing new and bolder talent.