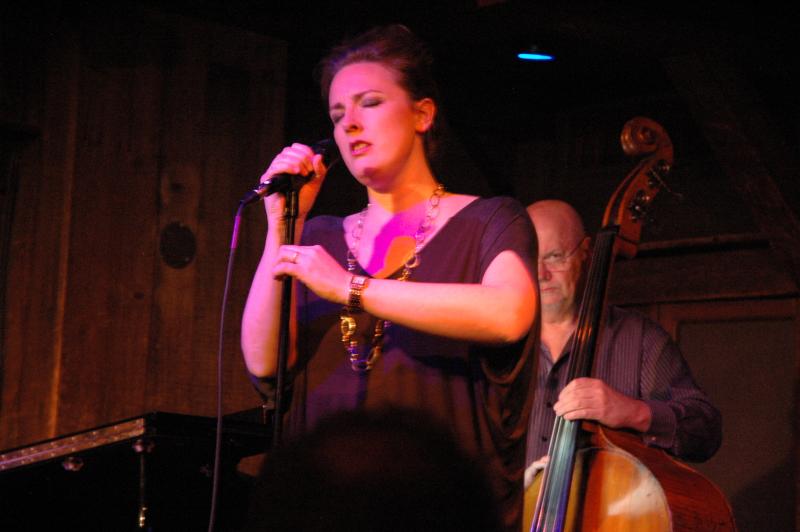 Sincerity, authenticity, and fidelity to tradition are qualities seriously lacking in what's left of jazz in America today. Computers, unbridled capitalistic exploitation, and a massive field of competing talent have led too many musicians to seek audiences through entertainment, egotism, mindless displays of virtuosity, and clever uses of ideas rather than straightforward self-expression of emotions and meaningful musical statements. Sadly, this is more true of jazz' birthplace, America, than in Europe, Canada, Japan, and other places where jazz is revered and taken seriously as an art form.

Along comes singer Sinne Eeg from Copenhagen, where expatriate musicians like Dexter Gordon, Kenny Drew, and Ben Webster made their home and where the tradition still plays well at clubs like La Fontaine and Monmartre. Here is a singer with poise and humility who sings a song as it is supposed to be sung, who infuses the words and music with feeling, while at the same time demonstrating that she has thoroughly absorbed the vocabulary of mainstream jazz, so that every inflection and turn of phrase is purposeful, perfectly timed, and designed to express the meaning contained in the lyrics.

So here she comes to one of the few remaining jazz clubs in Philadelphia, on a weeknight when many of the patrons are looking for a couple of drinks and a smidgeon of that music they heard about, so they're not going to really appreciate what she's doing. Still, she gets up on the stage with her two esteemed New York-based sidemen, pianist Kevin Hayes and bassist Jay Anderson, and—regardless of who's listening or not -she delivers a set of authentic, artful jazz singing worthy of Carnegie Hall (Remember the joke? How do you get to Carnegie Hall? Practice, practice, practice.) Her singing is sincere and unaffected, yet so musically astute that it bears echoes of her predecessors like Billie Holiday, Ernestine Anderson, and Carmen McRae as well as reminders of some of the great trumpet players like Roy Eldridge and Chet Baker and saxophonists like Lester Young and Stan Getz. On a night when no one seems to care very much, she becomes a transparent channel for the music rather than a personality trying to keep the audience's attention.

Eeg's dedication began early in her career when she engaged in serious jazz studies, including mentoring with American singer Janet Lawson, who sang with many of the great ensembles. More recently in 2014, Eeg received the coveted Ben Webster Prize, the first vocalist to receive that prestigious award. Her distinguished training and milestone could be heard as soon as she launched into her first number, "Come Rain or Come Shine." Her mastery was obvious. She was not just crooning, but rather shaping the tune with attention to nuances of phrasing and shifting the tempo to create subtlty and balance. Next, she took "But Not for Me" at a slower pace than usual, perhaps a bit jarring for those who hear it as a swing tune, but bringing out the emotions in the song.

By contrast, she did "It Might as Well Be Spring" as a jazz samba, which was a brilliant idea, thereby evoking the dizzying dreamlike euphoria implied in the lyrics and beautifully supported by Hayes' comping and Anderson's superb bass lines, the latter being reminiscent of the great Red Mitchell. (Jay even looks a bit like Red!)

Eeg then sang two fine ballads of her own composing: "Don't Be So Blue" and "Crowded Heart," the latter lyrics consisting of an inner monologue of a woman in conflict about an extramarital affair, which brought out Eeg's ability to introspect while she is singing, crafting the tune to express complex inner states. (That's the mark of a truly great jazz singer.) With "Love for Sale," she portrayed the vagaries of a sex worker (is that the politically correct term?) trying to solicit a client, exactly capturing Cole Porter's intent. Her scatting in this song was so finely woven that it could serve as an example for instrumental improvising.

Michel Legrande's iconic "Windmills of Your Mind" from the film, The Thomas Crown Affair, was done in a straightforward manner. The concluding tune, Lionel Hampton's "Evil Man Blues" (re-stated as "Evil Woman Blues") gave Eeg a chance to show the dark side of her female archetype, the "bitch" anima with a masculine shadow. In other words, don't mess with temptation. The blues structure and the feeling of the underworld provided just the right foils for Hayes and Anderson to display their improvising skills, which previously they held in check to accompany Eeg.

Venturing into the steamy urban jungle after all the office workers went home and the city seemed mired in existential ennui, this reviewer felt fortunate to have heard a jewel of a singer in the midst of it all.

Set List: Come Rain or Come Shine; It Might as Well Be Spring; Don't Be So Blue (Eeg); Crowded Heart (Eeg); Love for Sale; The Windmills of Your Mind.