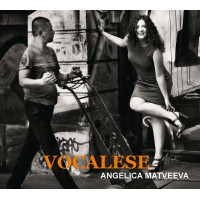 "Vocalese" is defined as, "a style or musical genre of jazz singing wherein words are sung to melodies that were originally part of an all-instrumental composition or improvisation." The grand purveyors of this jazz vocals offshoot include King Pleasure, Eddie Jefferson, Jon Hendricks and Bob Dorough. It is the most "jazzy" of jazz idioms. A grand introduction exists in the aforementioned Eddie Jefferson's Letter From Home (Riverside, 1961).

Another grand example is the polyglot Angelica Matveeva's appropriately titled Vocalese. Aside from Dorian Devins' whose The Procrastinator (Self Produced, 2013) carries the vocalese torch, Matveeva's offering provides a definitive look at the art in the 21st Century. An outgrowth of Louis Armstrong's "scat singing," vocalese typifies that jazz singing is. In equal measure, Matveeva addresses new vocalese offerings and classics by the masters.

Matveeva starts things off with the Asplund composition to which she provides the lyrics. The arrangement is fresh and busy, full of horn riffs and deft vocal gymnastics that would make Betty Carter proud. There is even a bass solo. Matveeva favors Wayne Shorter on the release, adapting his "Ping Pong" and "Yes or No" to her vocalese ends. She readapts "You Go to My Head" from The Lou Donaldson-Clifford Brown recording Memorial Album (Blue Note, 1953) to great effect.

Matveeva pays homage to Jon Hendricks on Clifford Brown's "Joy Spring" and Eddie Jefferson's "Moody's Mood for Love." She updates Joni Mitchell's "Goodbye Porkpie Hat" and dusts off Perrin's "Scrapple from the Apple. Matveeva support from her sextet is seamless and refined. Vocalese makes a good place to start digging into this essential part of jazz vocals.

Wonderyear; You Go To My Head; Ping Pong; Moody’s Mood for Love; Yes or No; Joy Spring; Goodbye Pork Pie Hat; Scrapple from the Apple.