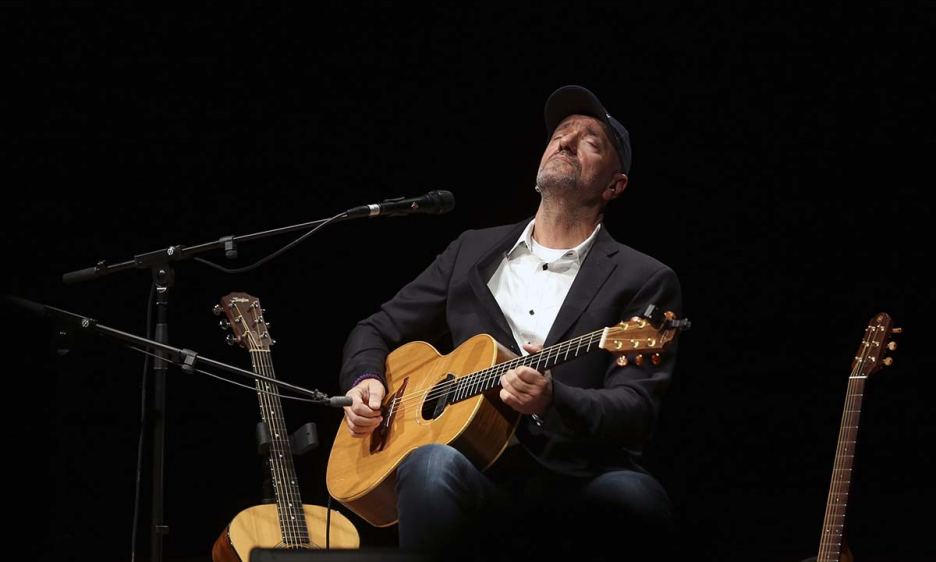 As a musician, guitarist Vlatko Stefanovski has always excelled in any format (and genre) known to people—from duos, trios, quartets to big bands and major world-class philharmonic orchestras, and his performance at the Macedonian Philharmonic Orchestra's Hall showed his prowess on the guitar as a solo performer when he showcased his ability to communicate a full range of emotions from joy to sadness and from excitement to sorrow to the packed crowd.

For the past 40 years his unique chemistry of songwriting skills, improvisational prowess, and rock virtuosity elevated him to stardom as one of the most popular instrumentalists and songwriters but now with each new phase and project he keeps reminding that not many artists who have reached early success have managed to balance the presentation of their past achievements and exploring new territories so creatively. The performance at the MPO's Hall, the first of the scheduled three sold-out concert at this location was in support of last year's masterpiece Majčin Jazik (or Mother Tongue) and regardless of his enduring popularity felt like a homecoming.

The concert's setlist also featured songs that were not only part of the Mother Tongue but have marked his illustrious four- decade career and it began the folk gem "Aber Dojde Donke" that was a staple in his former band Leb i Sol's repertoire. The first part of the set featured only Stefanovski on acoustic guitar where his approach was rich in emotion along with a beautiful delicacy of touch. The songs put his technical expertise front and center but unlike other virtuoso musicians, his performance was empowered by strong emotions. In his hands, the guitar sounded like a whole orchestra as he took the songs to unfamiliar territories but without losing sight of the shore. It was amazing to hear the way he reconfigured the harmony and the melody of well-known songs ("Zošto Si me Majko Rodila," "Ogrejala Mesečina," "Uspavanka za Radmilu M") or reels ("Pelistersko Oro," "Kasapsko Oro") and to impress with his range, sophistication and emotional complexity. He didn't go to excessive lengths in his improvisations and explorations but he explored the songs in detail and sometimes he explored certain side alleys. Apart from the technical delicacies and emotionalism what is characteristic of Stefanovski is his ability to create a magical bond with people in attendance as this writer has been able to observe on several occasions over the years in a variety of concert settings.

The concert itself was set in different stages with various guests joining him on the stage. The first guests that joined him on stage were singer Vera and double bassist Oliver Josifovski better known as the couple that fronts the world music band Luboyna. For the past few years, Stefanovski and Luboyna stroke a unique partnership and he has been invited as a special guest on their concerts. This time he returned the favor and invited them to join him on stage and they performed two songs "Eleno Kjerko" and "Jano mori." Vera is one of the best female vocals that this part of the world has ever produced and she mesmerized the audience with these songs.

Another guest was the Serbian vocalist Bilja Krstić who sang the heartbreakingly beautiful "Dimitrijo, sine Mitre" and a revamped version of a popular reel "Kalajdzisko Oro." "Kalajdzisko Oro" is one of those reels with characteristically catchy Balkan melodies but almost impossible to play complex music also popularized by Stefanovski ever since the days with the band Leb i Sol. Since she had her own version of this reel they re-arranged it to fit both artists' approaches, an a cappella and a bravura guitar performance. What followed were Stefanovski's songs from his solo career when he took the lead vocal: "Kandilce," "Vera, Nadež, Ljubov" and "Gypsy Magic." And for the final chapter, he welcomed the opera diva Vesna Gjinovska—Ilkova who sang two songs "Makedonsko devojče" and "Time To Say Goodbye" (a popular song by Andreas Bocelli and Sarah Brightman).

The concert ended with standing ovations and Vlatko returned for two encores where he performed the Leb i Sol classics "Bistra Voda" and "Skopje." For the most part, this was a tour de force of a live show with Stefanovski's infectious joy he brings to playing for an audience on full display. What he emanated in front of the approximately 700 attendees was the generosity of spirit that has been the hallmark of his now 40 year career as an artist.