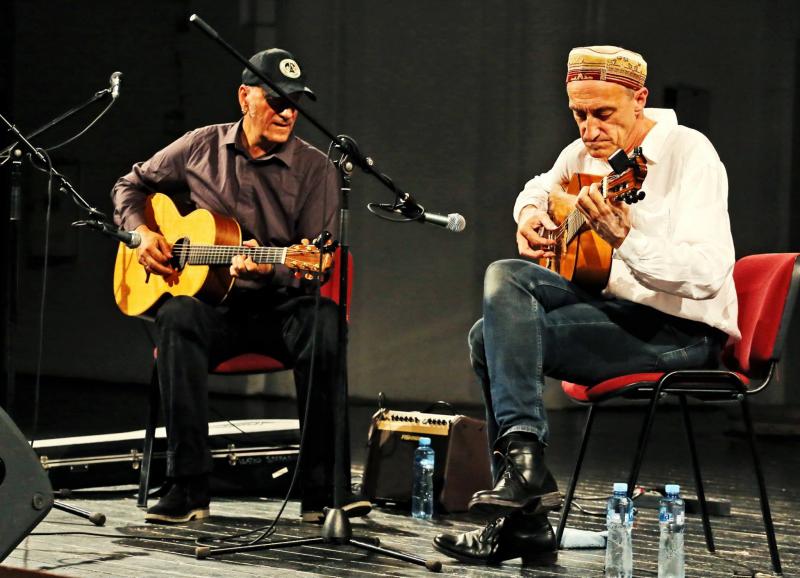 In a bravura performance, the duo consisting of guitarists Vlatko Stefanovski and Miroslav Tadic gave a breathtakingly uninhibited performance that occurred in the backyard of a Student dormitory in Novi Sad, Serbia. Ever since they have first joined forces twenty years ago, Stefanovski and Tadic have created a library of timeless music based on Macedonian folk music and have played together a plenty. For those fortunate enough to experience them in live performance, the lingering memory of this brilliantly skilled and compatible duo is the joyous feat of intuitive synchronization, unmatched guitar skills, and their adventurous and often uncompromising instincts. Their skills and instincts are informed by all kinds of music and often they stretch this folk music as far as they can. Obviously, they don't see any boundaries between them and the idioms. As a result, the overall effect is of music enlivened but not overwhelmed by outside influences. But that merging of Macedonian folk music and various other sensibilities tells only part of the story.

On a warm and pleasant night, these mesmeric songs conjured up an alluring mood of bluesy soul-searching and melancholically yearning. For most part, the songs in their repertoire were slow love ballads ("Sanoc sedam Treno," "Prošeta se Jovka kumanovka"). The duo's radiant melodicism and their tight but loose interactivity evoked an almost meditative mantra that was slowly shaping itself. Each musician allowed the other enough space to investigate and contribute, to lead and to support. Their improvisations were more like conversations rather than contests. As the evening went on, the songs began to take pace, with series of dynamic swirling reels "Kasapsko Oro," "Pajdushko," "Kalajdžisko Oro" and playful, jovial songs such as "More čičo reši da me ženi." Their interplay was nothing short of astounding as these interpretations were full of light and shade, drama and humor with plenty of melodic and rhythmic inventions along the way.

This was an uplifting and extraordinary show from start to finish. Tadic and Stefanovski are truly sensitive interpreters of these songs and they have a rare gift of putting their own stamp on a song or a reel without compromising its soul. Magic occurs whenever these masters come together and play. Regardless of their different sensibilities and interests, it's their mutual respect that shows them the right way to achieving something great.