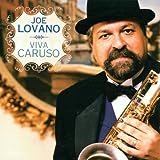 In Stanley Tucci’s 1996 movie Big Night, two Italian immigrant brothers lament that the authentic Italian cuisine of their restaurant has lost favor with customers who prefer the Franco-American menu of their cross-town competitor. It’s the Enrico Caruso culture versus the Louis Prima crowd and for the volatile chef of the authentic Italian restaurant there is no in-between.

Listening to Viva Caruso, Joe Lovano’s tribute to the celebrated Italian tenor, you can almost envision Lovano as the brilliant Italian chef, using equal measures of skill and imagination to concoct magnificent musical entrees that are as much a delight to hear as they are to actually consume. A great Italian tenor himself, Lovano interprets the songs of Caruso through a rotating accompaniment of jazz ensemble, classical chamber ensemble and opera house symphony. Together with the gifted composer and orchestrator Byron Olson, he delves into Italian folk themes, popular songs, operatic suites and originals with the passion of a child who has just returned home from his first trip to Naples. In the process, he creates very modern improvisations on songs that would seem to defy any such pretexts.

There is layer after layer of melody on Viva Caruso and Lovano’s tenor sax assumes the role of Caruso’s voice throughout, echoing his lyrical purity and stressing of consonants throughout each song. “Vesto La Biubba” introduces the melancholy voicing of Lovano and is followed up by the lovely call-and-response waltz between saxophone and woodwinds on “Tarentella Sincera.” Very few performers possess Joe Lovano’s skill for conveying the sublime and two wonderful examples of this talent are the songs “Cielo Turchino” and “Pecche?” On the former, Lovano’s smooth bop phrasing dances playfully in and out of the woodwinds with natural ease. On the latter, his warm tones float along dreamy currents to intertwine with Judi Silvano who echoes him in a tender wordless vocal.

These are hauntingly beautiful pieces, but like the gregarious Caruso himself, the melancholy is balanced out by joyous songs like “The Streets Of Naples,” “ Viva Caruso ” and “Santa Lucia” which communicate all the festive atmosphere of an Italian street carnival thanks to Gil Goldstein’s accordion, the tango rhythms of Ed Schuller and Scott Lee on bass and the inspired drumming of Joey Baron throughout. It is songs like these and Lovano’s remarkable version of “O Sole Mio” that will make you feel like you’re on an endless gondola ride, drifting by crowded cafes along the canals of Venice.

The centerpiece of Viva Caruso is a stunning four-part original suite by Lovano entitled “Il Carnivale Di Pulcinella” which utilizes diverse instrumental combinations to depict a centuries-old Naples carnival. The most dramatic section in the suite is the jarring dissonance Lovano and Olsen have created to represent a frantic tarantella dance and the deadly spider bite that sets it in motion. It’s downright frightening. Like the impressionistic compositions of Lovano’s 1994 release Rush Hour, “Il Carnivale Di Pulcinella” is a complex, emotionally charged song cycle that displays how deep Lovano’s musical vocabulary is and how far his genius is capable of taking him.

In a press release, it was written that Lovano and Olson’s first idea was to interpret only Caruso’s operatic arias. It is for the better that they chose more selections from Caruso’s songbook. I think that many jazz listeners would have appreciated Lovano’s artistry with the arias, but they would have ultimately tuned out due to the classical (and dare I say non-jazz ) structure of the pieces. As they stand, the compositions on Viva Caruso tease enough to lure the uninitiated into listening and learning more deeply. And that is an accomplishment that should send Joe Lovano singing “O Sole Mio” through the streets of Little Italy as if he were the great Caruso himself.