By WOODROW WILKINS
November 7, 2007
Sign in to view read count 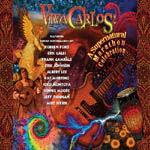 If Carlos Santana isn't the best electric guitarist of all time, he's easily one of the most revered. From classic rock songs like "Black Magic Woman and "Europa to more recent collaborations with pop singers like Rob Thomas ("Smooth ) and Michelle Branch ("The Game of Love ), Santana is perhaps the most recognized name in the world of electric guitar.

A Santana fan, guitarist/producer Jeff Richman culls an impressive lineup of rock, pop, blues and jazz guitarists in a tribute, Viva Carlos!—A Supernatural Marathon Celebration. As he did with The Royal Dan —A Tribute (Tone Center, 2006), which paid homage to Steely Dan, Richman scores big, covering several of Santana's popular recordings. Richman is backed by a core band of Peter Wolf, keys; Dave Weckl, drums; Abraham Laboriel, bass; and Luis Conte, percussion and vocals. A different lead guitarist is featured on nine of the ten tracks.

Weckl and Conte set the tone early on the Latinesque "Se a Cabo, which features Vinnie Moore as the lead guitarist. With powerful rock flair, Moore makes his guitar sizzle, particularly during a high-speed solo that sets up a percussive duet by Conte and Weckl.

Richman leads on the ballad "Europa (Earths Cry, Heavens Smile). Mike Stern delivers one of the finer performances of the album on "Oye Como Va, with Conte adding the vocals.

On the laidback "Aqua Marine, Eric Johnson plays the haunting lead, while Laboriel's bass adds some funk. Frank Gambale, who along with Weckl was part of the Chick Corea Elektric Band, is featured on the Brazilian-inspired "Samba de Sausalito. With another strong percussive presence by Weckl and Conte, and Gambale's blazing lead, this is also one of the better tracks on an already excellent album.

Richman arranged all the tracks on Viva Carlos!. His associations over the years include some musical heavyweights, cutting across genres. Among the artists he's worked with are Alex Acuna, Eartha Kitt, Ronnie Laws, Christopher Cross, Lou Rawls, Doc Severinson and B.B. King. With eleven albums to his credit as a solo artist, Richman further cements his reputation as a quality producer with this tribute to Santana.