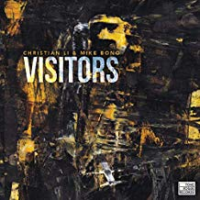 The New York-based duo of guitarist Mike Bono and pianist Christian Li celebrate a decade of collaboration with Visitors, which they see as "a souvenir of the past and a blueprint for the future." It's a varied album of nine originals, with engineer Pran Bandi trying as much as possible to recreate a live atmosphere in the studio, facilitating communication and connection.

The opening number, "Puddles," is pleasantly meditative with an interesting solo from Dayna Stephens on tenor sax and some fine, understated work by Bono, who wrote the piece.

Li's "Little Rascals," which follows, is up-tempo and jagged, opening with his piano going all over the place. Alex Hargreaves joins in with some similarly disjointed violin.

Then there's "Tango," which certainly isn't. Hargreaves returns with more disjointed fiddle but, before it gets to be too much, Bono comes to the rescue on guitar. "Moon Over New Kent" is much as expected with a title like that: a lazy meditation with nice piano by Li followed by Bono on guitar.

"Space Invaders" is, well... spacey. The title track, which follows, comes down to earth, with Stephens' saxophone leading into Li's piano. After this the song just peters out, though quite pleasantly, with Lee Fish's cymbals to the fore.