By DAN MCCLENAGHAN
September 25, 2013
Sign in to view read count 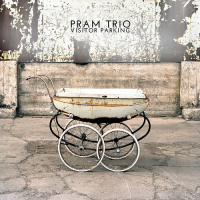 An abandoned vintage perambulator—a pram—discovered on the streets of Toronto inspired the Canadian threesome to take as a name for their group the Pram Trio. Pictured on the cover of their debut album, Visitor Parking, the pram seems to have seen better days. It suffers rust and corrosion. If it ever possessed a sun shade, it is long gone. But the group that took its name from the antiquated pram is anything but old fashioned. There sound, on the opener, bassist Mark Godfrey's original, "JPG," is edgy and interactive, often urgent, and very much in the school of the modern-leaning piano trios.

Godfrey is the main songwriter on a set of seven originals, with his contribution of five compositions. Pianist Jack Bodkin adds one tune, as does drummer Richard Piasetski, in addition to singer/songwriter Joni Mitchell cover, "A Case of You."

Piesetski's "Muggy Day" lays down the tenderest of moods, via pianist Bodkin's exquisite touch on a gorgeous melody in front of the soft flutter of drums and deliberate bass lines that shift into a swinging walk mode before easing back toward the ruminative. Bodkin's "Tunnels" opens in a dark, contemplative fashion that features a waxing, waning momentum and subtle and superb trio interplay.

Godfrey's "Tuco" has a rolling momentum and a modern sheen, including a wonderful piano-comped bass solo, and a big, resonant bass solo introduces his "Karen Michelle" as someone mysterious and majestic, with Bodkin's piano adding a glow of bone-deep prettiness on perhaps the disc's highlight.

The trio chooses from the songbook of fellow Canadian Joni Mitchell. "A Case of You" is one of Mitchell's classics. The Pram Trio version is subdued and stately, straight ahead and reverential, and it doesn't overshadow their own superb compositions, as it wraps up this very fine debut.