By HRAYR ATTARIAN
September 17, 2015
Sign in to view read count 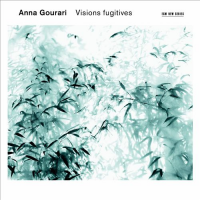 Prodigious pianist Anna Gourari brings her unique touch to Russian composer Sergei Prokofiev's twenty miniatures on Visions Fugitives. The series has infrequently been recorded in its entirety and rarely with the wit and elegance that Gourari brings to it.

She tiptoes gently on the nocturnesque "1.Lentamente," brings a lively spontaneity to the effervescent "11. Con vivacità" and a contemplative maturity to the expansive "8. Commodo ." She builds the musical ambiences of each movement often with unexpected and deceptively incongruent musical expressions. This tense yet integral approach to the essence of the composition makes for a refreshing and captivating listening experience.

For instance her rolling arpeggios build a strangely serene sense on the pastoral "9.Allegretto tranquillo" while she lets loose a fiery passion on"14. Feroce" without losing her sophisticated edge. Despite the angularity of her percussive chords "19. Presto agitatissimo e molto accentuate" retains its lyricism. In fact her hard-edged lines underscore the melodic core of the movement. Gourari uses sparse notes and silent pauses deftly as she concludes with the ethereal and haunting "20. Lento irrealmente"

Although "Visions fugitives, Op.22" lends its name to the title, two other, equally intriguing works are also included on the album and are quite complementary to Prokofiev's piece. There are only a handful of documentations on disc of Russian composer Nikolai Medtner's "Four Fairy Tales (Skazki), Op.26." English pianist Hamish Milne has been one of the most notable performers of the suite. Gourari interprets one, the No3 In F Minor, with sensitivity. She brings to it a warm melancholy and imbues it with a folk-ish romanticism.

Polish composer Frederic Chopin's "Piano Sonata No.3 In B Minor, Op.58" closes this stimulating record. Gourari's ardent reading of the first segment is expressive with reserved sentimentality. She uses very subtle dissonant tones to channel restless emotions but also plays with a lullaby like hypnotic lilt. Her unrestrained fervor builds a symphonic atmosphere on the second part that contrasts with the pensive, somber mood of the third. Her agile pianism brings a bright vibrancy to the final segment of this complex opus.

With each release Gourari's style matures and crystalizes without losing its idiosyncrasy. Her singular, almost improvisational, approach to various gems of the western Classical canon imbues them with refreshing innovation while remaining simultaneously deferential to their original creators.