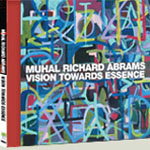 This is a live solo piano set from 1998's Guelph Jazz Festival, in Canada. Chicagoan-cum-New York pianist Muhal Richard Abrams performs the album's title piece, which is around an hour long and is divided into three parts. Ultimately, there are only the tiniest breaks in this improvisation and these demarcations only exist for listening convenience. Once Abrams begins, he's off on a journey that's so organized that it appears to possess the discipline of a premeditated composition. He views this solo improvising setting as the peak of his own artistic expression, but Abrams also contributes in the visual zone, by painting the disc's cover art.

In the beginning, Abrams is in an exploratory frame, caressing the lowest bass keys and then swishing across to a Far Eastern opalescence, as if he's hearing Indonesian gamelan tones in his head. These wanderings always return to a bassy punctuation and the runs become increasingly entangled, operating several lines simultaneously. He cuts back to clear space, partnering high and low note extremes in a field of minimalism. The piece has a mysteriously glowing quality, like an exotic invocation. Abrams releases a continuous avalanche of notes, a cascade of chiming. It's as if these are all threaded baubles, stretched taut with dramatic flourishes. About half-way through, a lurching gallop develops and the distant ghost of ragtime passes by, aggressive stabs becoming more frequent, then disintegrating into repeated bell- clusters.

For an entire hour, Abrams controls the development with an iron fist, in a perfectly measured progression of styles that are nevertheless connected and undergoing a very gradual metamorphosis.