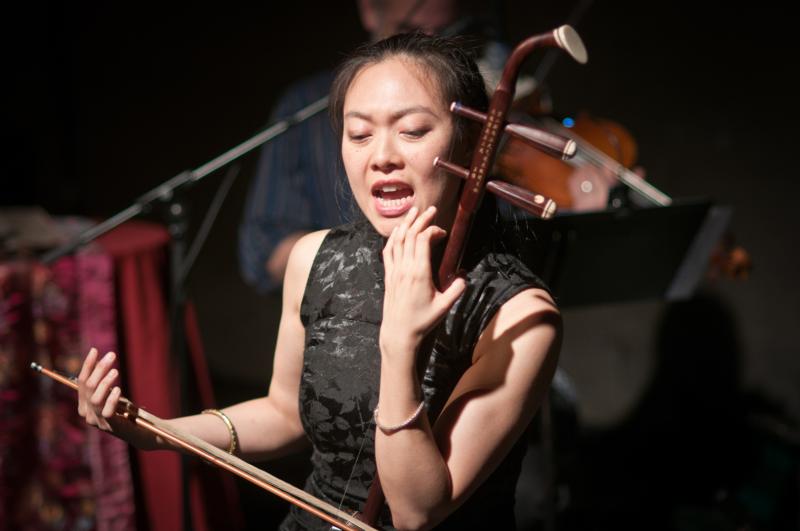 New Orleans saxophonist Edward Kidd Jordan, who was the honoree at the 2008 Vision Festival, delivered one of the standout sets on the fifth day, with a redoubtable all-star quintet. Though they didn't have a track record as a band, the assembled luminaries boasted more than enough familiarity with the fast and loose territory to generate tension and excitement. Always a good omen, William Parker filled the bass chair, making his fourth showing of the 2011 Festival. Baritone saxophonist Hamiett Bluiett returned for his second, while new this time out were two musicians who have never quite garnered due acclaim: venerable pianist Dave Burrell and mighty drummer William Hooker. 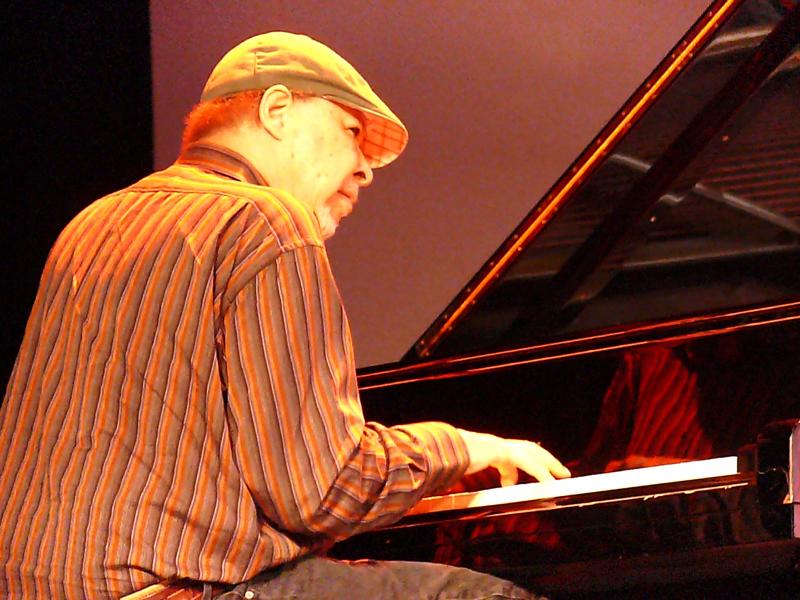 After a start where the flames leapt in sporadic bursts from Jordan's tenor saxophone, fanned by Burrell's piano up-drafts, their extemporized trajectory mirrored a sine wave in its regular peaks of intensity. Jordan's impassioned yelping falsetto shaped proceedings, whether adding fluent contrapuntal exhortation to the rumbling rhythm section or forging an earthy riff. Without his usual radio pickup, he occasionally lost power when he strayed too far from the mic stand, but nonetheless the most incendiary moments stemmed from the feverish intersection of Bluiett's baritone aerobatics with the leader's squalling hollers. Burrell had on his fire music hat, restlessly battering the keyboard, flipping from palms to the backs of his hands during his glissandos. At one point the horns quieted, to leave the pianist to captivate with jabbing chording peppering spidery excursions to devise a wonderfully spiky solo.

When it came, the ending imparted the feel of a spiritual lullaby. Jordan stilled a rambunctious ensemble leading to a rubato rapture, where he interjected vocal shouts amid his mournful John Coltrane-inspired wail, as Parker, bow in hand, echoed and amplified the saxophonist's heartfelt soliloquy.

Pianist Matthew Shipp demonstrated, again, his strong attachment to the untrammeled communicative opportunities of the piano and saxophone duet. Sessions with reedmen Darius Jones, on Cosmic Lieder (Aum Fidelity, 2011), and Sabir Mateen, on SaMa (Not Two, 2010), have been amongst the most recent, but tonight he invited English saxophone iconoclast Evan Parker into the spotlight, revisiting the format of their acclaimed Abbey Road Duos (Treader, 2007).

Together they negotiated a searching 50-minute conversation broken only by untimely applause as Parker switched from tenor to soprano saxophone midway through. While in theory a meeting of equals, the Englishman sounded somewhat restrained early on, often following Shipp's lead in terms of the dynamic contours. Not that he slavishly matched the pianist: one of the pleasures of their interaction was that, apart from one fleeting passage where Parker reflected the American's line, their connection was oblique rather than literal. As Parker chuntered forcefully in the tenor's mid-range, Shipp ranged far and wide, with glinting flurries snatched from the extremes of the keyboard. 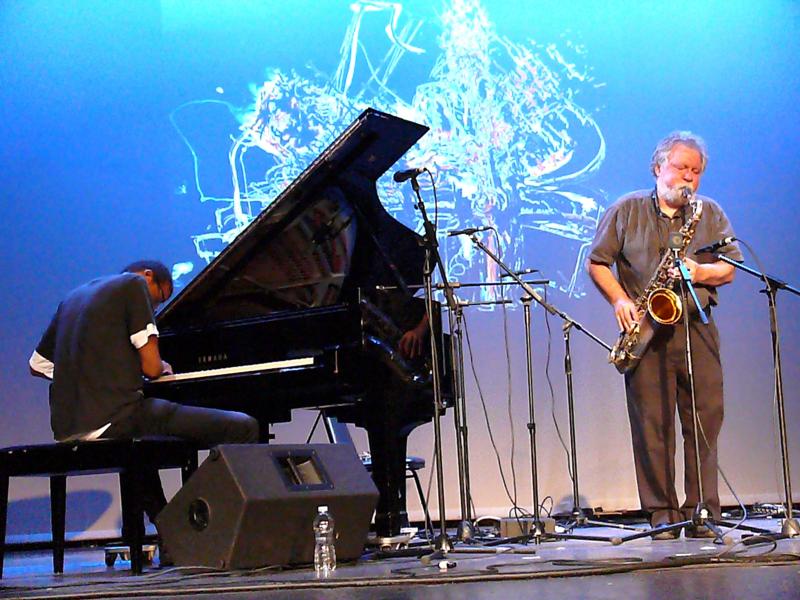 Once underway on soprano, Parker exhibited his peerless facility at circular breathing to unleash one of the astonishing outbursts which have become his trademark on the straight horn, layering chirps, whistles and nasal burrs, to give the impression of three separate voices. Shipp reentered, deploying icy shards, drawing a quick response from the saxophonist and initiating a lovely sequence of overlapping crystalline patterns. As Parker eased into another hyper-fast spray of notes, the pianist kneaded thunderous crashes from the bass register. It seems that the American always performs at the top of his game in his Vision Festival appearances and tonight was no exception as he reconstituted his favored tropes into a dazzling parade of pianistic imagination. Given Shipp's fondness for recasting standards, it was a surprise that the only reference to the piano pantheon emanated from Parker, prompted by a felicitous sounding interval to quote Thelonious Monk's "Shuffle Boil." However, Shipp was not to be deflected from his singular course and the moment passed as the pair continued in their mercurial invention to complete another excellent outing.

Elsewhere on the fifth night, Jen Shyu's Raging Waters, Red Sand gave an intensely theatrical exhibition in the downstairs theater, showcasing the leader singing, dancing and bowing erhu (a two stringed Chinese fiddle), often in tandem with the athletic movement of the inscrutable Satoshi Haga. Mat Maneri's viola and Chris Dingman's vibes provided carefully controlled support in a performance of great impact. Trombonist Dick Griffin opened the evening in the company of a string quartet, made up of what Griffin termed "players with the holy ghost in their sound." That description proved particularly apt for violinist Charles Burnham's bravura hoedown and Akua Dixon's delightfully swinging cello.

By the sixth evening the mercury was rising both literally and metaphorically, with two of the festival highlights on the main stage courtesy of improvising super group Planetary Unknown, and an expanded edition of the collaborative trio Paradoxical Frog.

Named after their eponymous 2010 entrance on the prolific Clean Feed imprint, Paradoxical Frog comprised a multinational coalition of German saxophonist Ingrid Laubrock, Canadian pianist Kris Davis and New Jersey native, drummer Tyshawn Sorey. For tonight's show they were joined by special guest Mat Maneri, on viola. Since the German moved to New York City from London in 2008 she has connected with a like-minded coterie of up-and-coming talents, also manifest to startling effect in her Anti-House band, likewise featuring Davis on occasion. 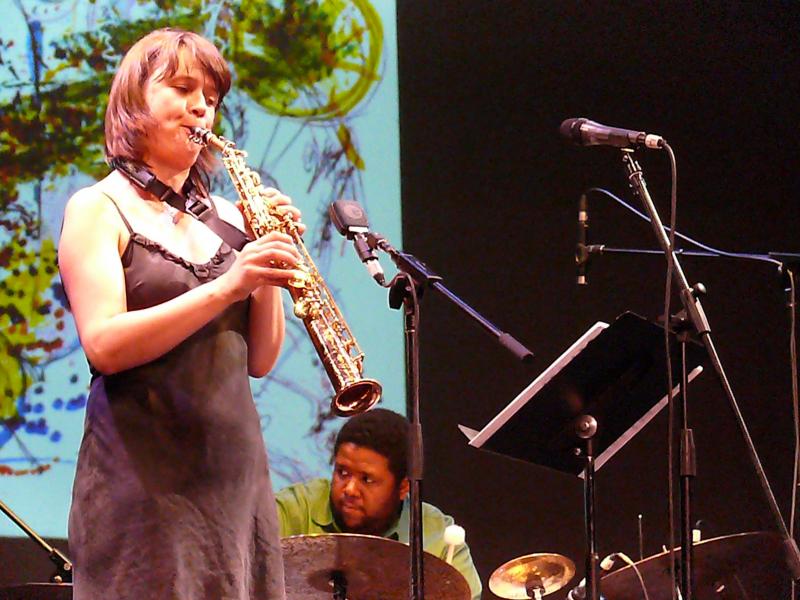 Paradoxical Frog shared with Anti-House the delicious ability to blur the distinction between composition and improvisation, with written lines erupting unannounced from within passages of what seemed pure unfettered expression. Sometimes the only clue that charts were in play was their physical presence spilling off the music stands, and the close concentration they demanded. Close your eyes and you might never guess for extended periods, such was the unpredictability of their course.

A case in point was the opening piece, in which delicate gesture magnified and proliferated: a muffled saxophone squawk, a swiftly struck cymbal, a bow scraped against strings. The structure developed like a living entity, designed according to its own distinctive DNA, until a sudden concatenation burst out of nowhere. Then it was back to the softest of drum rolls and tickles of the treble register, before a piano/viola unison once again betrayed the composerly intent.

Positioned centre stage, Laubrock formed the focal point not only visually, but also grabbing the ear with her ever expanding sonic palette. At one stage she forsook her saxophone entirely, first whistling, then coughing and vocalizing, as everyone intently followed scores. Then she began growling and shouting through her instrument, finally launching into an outburst of skronk, replete with distorted tones, as Sorey stoked the fires with mallet in one hand, drum stick in the other, and Davis ran electrifying interference across the keys. Each member evinced that capacity to switch in and out of well-drilled unisons, while keeping the spontaneity of something invented on the spot. Maneri blended seamlessly into the group conception, evincing the same winning combination of the cerebral and the visceral. Their three pieces kept the hall in rapt attention throughout, culminating in a richly deserved standing ovation.

Similarly stellar, Planetary Unknown, a foursome uniting saxophone colossus David S. Ware with his onetime sparring partner, pianist Cooper-Moore (then known as Gene Ashton, who appeared on Ware's Birth Of A Being (Hat Hut, 1979)), followed up with another outstanding show. Tonight was the quartet's premiere live appearance and they lived up to the promise of their impressive 2011 Aum Fidelity debut. Like that studio session, it was sculpted completely on the fly, but the difference here was that everything was contained in a single unbroken torrent. 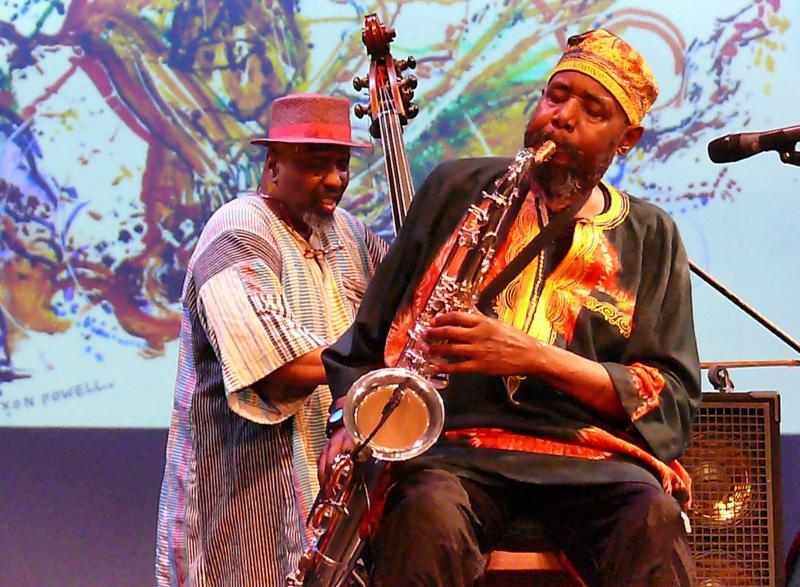 Ware opened with an a cappella tenor saxophone yelp, before the whole band piled in. Cooper-Moore gave it up from the off with energetic arpeggios, glisses and stabs, while bassist William Parker combined with drummer Muhammad Ali to construct a muscular rolling pulse. Over it all, the reedman maintained his stratospheric outpouring to create a compelling approximation of free jazz heaven. Ware and Cooper-Moore appeared to be having a competition to see who could go at it the longest and the hardest. If that was so, it was the saxophonist who shaded it. In spite of not looking well and playing from a sitting position throughout, Ware was unrelenting. His magisterial tone still intact, he smoked, alternating gruff blasts with wailing ululations.

Cooper-Moore, a talent deserving wider recognition, despite stalwart service with Parker's In Order To Survive, his own Triptych Myth, and Darius Jones' celebrated Man'ish Boy (Aum Fidelity, 2009), periodically ceased pummeling to mop his brow, but there was no letup. Even when Ali began yelling out the names of the glorious fallen, including Billy Bang and Marion Brown, he was soon submerged by Ware's stentorian cries. Another brief hiatus saw the pianist share a beautiful interlude with Parker's heartrending bow work before the saxophonist re-launched, triggering a concluding blowout in which Cooper-Moore added fists, forearms and elbows to his already formidable armory. Another standing ovation was the inevitable consequence.

Unfortunately timings meant that it was impossible to catch shows in the downstairs theatre between those in the main hall, but of note elsewhere, in the final set of the night, Henry Grimes' searing violin, wielded in a style reminiscent of Ornette Coleman's forays on the instrument, illuminated his acoustic bass duet with guitarist Marc Ribot.

All Other Photos: John Sharpe