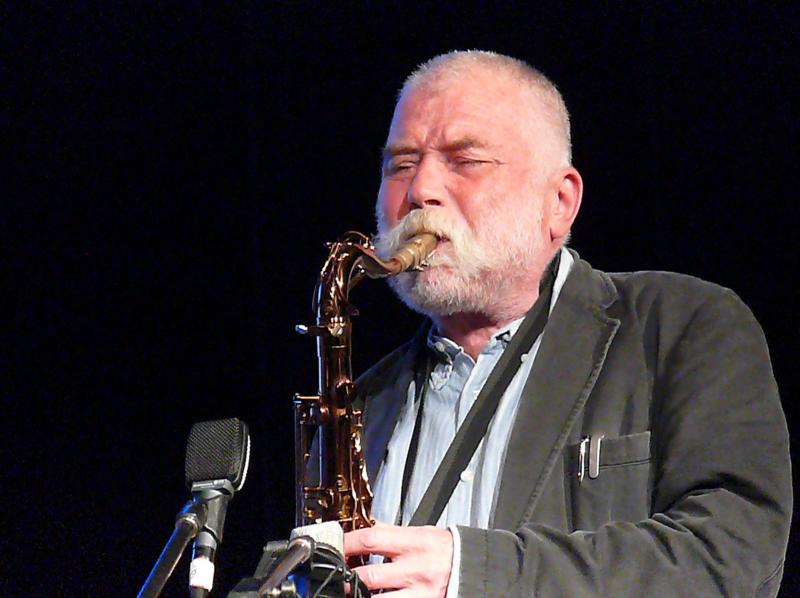 Each year the Vision Festival honors one of its own—someone from the avant jazz community whose lifetime achievement merits celebration. This year, for the first time, the plaudits jet-streamed across the Atlantic, with German saxophonist Peter Brötzmann the honoree. Brötzmann has been a towering presence in European free music since the 1960s, with his Machine Gun (FMP, 1968) long recognized as a classic of the genre. But he has also reinvented himself many times since, hooking up with successive generations of rising talent and reinvigorating his own artistry in the process. For more than ten years his Chicago Tentet has been one of the premier large groups in the music, and the evening's lineup sparkled with colleagues from that illustrious unit.

Even though he has breasted the 70-year tape, there can be no faulting the celebrant's stamina. He led three different units and was onstage for some 150 minutes, blowing hard throughout. And no-one blows harder than Brötzmann: his unique ensemble cleaving sound befitting an elemental force of nature. But as always in recent years there was a tender side redolent of world weary lyricism, and the contrast between the two modes provided some of the most affecting episodes.

Opening the procession was a foursome, which appropriated fellow Tentet veteran reedman and trumpeter Joe McPhee alongside the German, backed by the twin basses of William Parker and Eric Revis. This was a familiar format for McPhee, whose Bluette band from the early 2000s was built on the foundations of bass masters Dominic Duval and Michael Bisio, but less so for the leader. While some might miss the heft of a Hamid Drake (absent from the Vision Festival for the first time in many years) or Andrew Cyrille, their absence meant all the more opportunity to distinguish the finer detail etched by the reeds in all its glory. After surveying the sold-out auditorium as if taking stock, Brötzmann began the activities with a signature clarion call on tenor saxophone, his buzz-saw vibrato making the hairs on the back of the neck stand up. Dual pizzicato threads interwove to buoy up the leader, while McPhee heckled a pocket trumpet counterpoint. 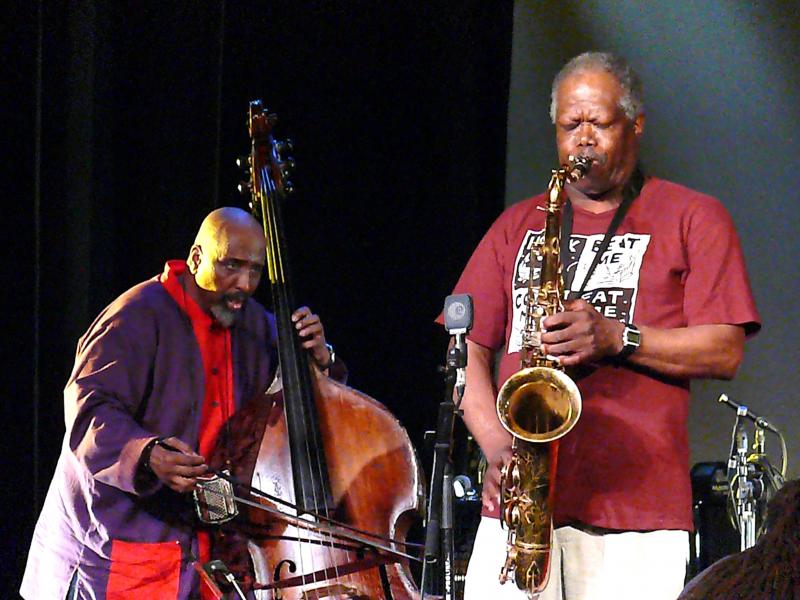 Even in close formation, each bassist managed to give the other space. Parker's soulful, emotionally charged arco was underpinned by the resonant fixed points from Revis; later, when Parker plucked insistent motifs, Revis colored them with hard koto-like phrases extracted from just above the bridge. Inevitably the finest moments came when the horns joined baying at the moon: the European plastering layer upon layer of quivering pulsation upon his impassioned yelping, McPhee screaming in tandem on tenor saxophone. When Parker blended a ululating wail with his bow into the colloquy the synergy threatened to levitate the stage. It was an excellent start to the party and one of the preeminent shows of the entire Festival.

Even on an occasion such as this the reedman was not resting on his laurels. So for the second set he debuted an unusual duo with Chicago vibraphonist Jason Adasiewicz. The challenge perhaps was greater for the younger man: how to keep up with the ear-shredding saxophonist? His initial gambit in response to the German's alto saxophone cry was to pound on the bars so forcefully that various implements dropped to the floor. But the resultant pealing thunder achieved parity. 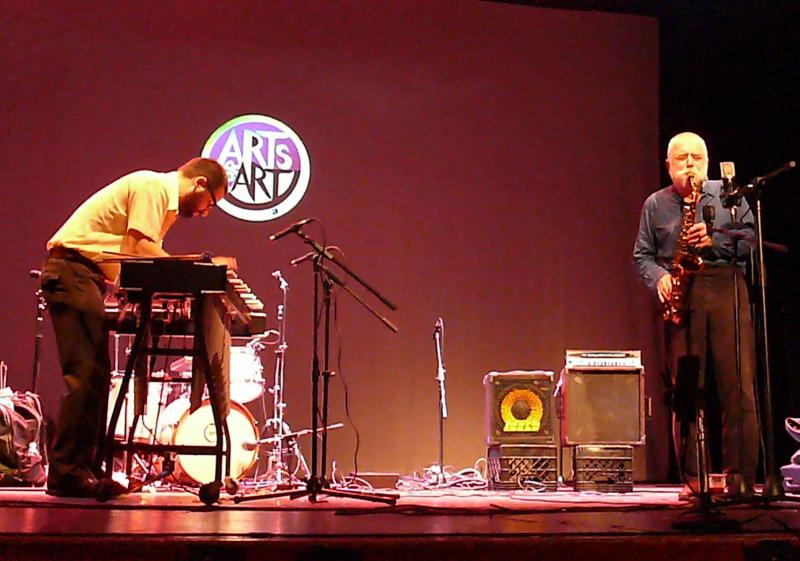 Although zinging repetitions worked best for Adasiewicz, he also carved out worthwhile solo spots, as in the second piece where he instituted a lovely rippling motif against which he interpolated atonal runs and foot stomps on the pedals. On tarogato, Brötzmann delivered a delicate etude, which quickly morphed into a forthright rasping tirade contrasted against the vibes ringing tones. Another winning combination which left both men happily embracing at the conclusion.

Programmed to give Brötzmann respite, trumpeter Peter Evans' Pulverize The Sound ensured that the audience enjoyed no such luxury. This was the brass man's equivalent of Brötzmann's Full Blast Trio: uncompromising and in your face, bristling with amped up bass and pounding drums. Evans inhabits a variety of terrains from solo abstraction to post-modern category mashing with Mostly Other People Do the Killing, so it's never clear what to expect. But this time the clue was in the name. Actually a collective with electric bassist The Hub and drummer Mike Pride, with both contributing compositions, the trio maintained a fierce focus. 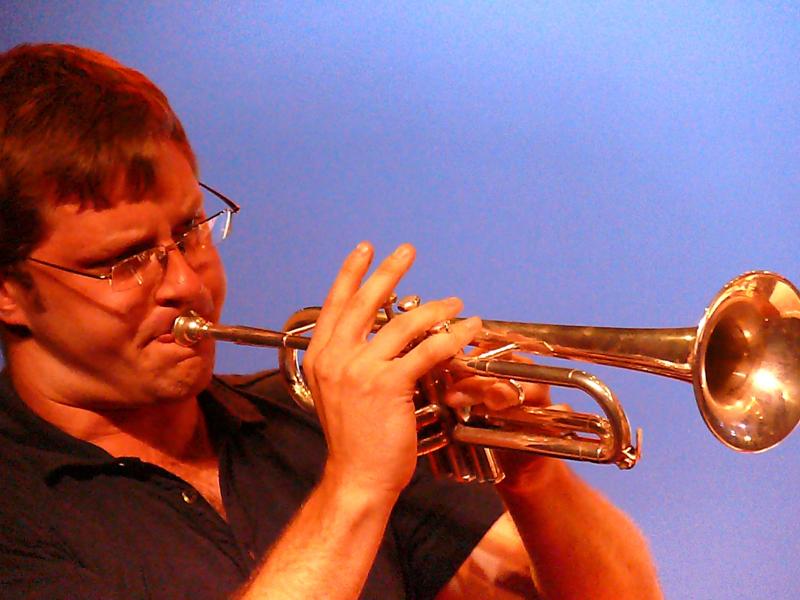 Fuzzed bass loops, breakneck drums and percussive trumpet blasts combined in a sledgehammer start. Evans nonetheless excelled, belaying a lexicon of hyper fast trumpet maneuvers: clicks, squeals, growls and fanfares piled on top of each other with dizzying precision. The group's third number was jaw-dropping. To begin, Evans conjured a circular breathed muted drone, over which Dahl and Pride interjected a seemingly random sequence of furious outbursts of fuzz bass and crashing drums, though stopping and starting in perfect synchrony as if conducted or following a score, though none was in sight. All through it, Evans sustained his barely changing single tone. It was a startling juxtaposition of two kinds of amazing musicianship and elicited raucous affirmation from the rapt throng. But overall the raw volume and power divided the crowd.

To close out the night, Brötzmann showcased what could almost be termed his Chicago Quintet. It comprised reedman Ken Vandermark, in his first Vision Festival appearance; Kent Kessler, his regular bassist from the Vandermark 5; and Norwegian drum dynamo Paal Nilssen-Love, all longstanding confreres from Brötzmann's Tentet. Alongside them was reedman Mars Williams, a former member of both the Tentet and the Chicagoan's combo. Those connections paid off in handsome style, with almost telepathic, on-the-fly arrangements, smooth transitions, and a shared mastery of dynamics during a performance just shy of the hour mark.

Unsurprisingly they blasted off at high intensity, with Brötzmann on tenor—his most powerful horn—Williams on alto and Vandermark on clarinet. After the opening salvo, a duet emerged from the maelstrom, with Vandermark (by now on tenor saxophone) and Kessler's muscular bass, before being subsumed once more within the polyphonic blast of the front line. An Americana-tinged section for horn choir, arco bass and Nilssen-Love's gongs gradually but inexorably built up to storm force, launching an alto explosion from Williams, with Vandermark on tenor, characteristically riffing in support, as Brötzmann stood back observing paternally. 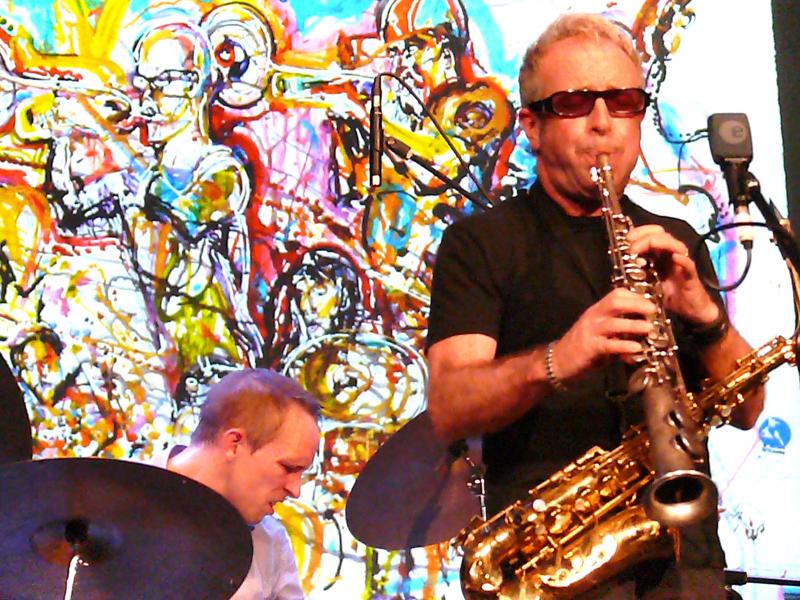 From full ensemble they switched in the twinkling of an eye to a skronk duet between Vandermark's tenor and the Norwegian's spare cymbal and drum punctuations, recalling their compelling duo triumphs such as Milwaukee Volume (Smalltown Superjazz, 2009). Later, Brötzmann breathily channeled Coleman Hawkins in the company of Kessler's measured bass, before going places of which Hawk never dreamed. A second piece unleashed the three tenors of the Apocalypse in a cathartic blow out, terminated in a well-practiced move by the leader's leap into the air which cued an abrupt halt as he landed. The standing ovation that ensued was no more than his due for an outstanding sequence of music.