Contrary to the belt tightening going on all around, the Fifteenth Annual Vision Festival sprawled even more languorously this year, with events spread liberally over eleven days in diverse downtown New York City venues. That a festival presenting "avant jazz," as they like to term it, has survived and even thrived for so long without big business sponsorship is a stunning achievement, and one that organizer Patricia Nicholson Parker and her Arts for Arts board can be justly proud of. While the core beneficiaries remain the musical community of the Lower East Side loosely centered around bassist William Parker, each year's schedule shows incremental adjustments and improvements, particularly in seeking to reach out to the wider community.

As ever, the Vision Festival is about more than just music, though that remains the primary focus for the vast majority of festival-goers, with time and space given over to poetry, visual art, and dance. There was a tinge of sadness this year, in that a program which already billed tributes to greats who had passed away in the preceding 12 months, such as the legendary drummer Rashied Ali and the bassist Sirone, also had to deal with the deaths of trumpeter Bill Dixon and saxophonist Fred Anderson just before and during proceedings.

One feature of the Vision Festival, perhaps necessitated by the lack of commercial support, is the down-home nature of the event with musicians and volunteers pitching in alongside the small paid staff to run the show. It all begets a relaxed and friendly attitude that sees regulars returning each year from across the U.S. and indeed the globe, drawn back by the chance to see so much fantastic music in a short time without having to dart between venues.

As a prelude to the centerpiece of the Festival at the well-appointed Abrons Arts Center (for the second year), a series of shows were sequenced at various clubs and bars, with two free outdoor performances by trumpeter Roy Campbell's trio and William Parker's Little Huey Sextet, providing opportunities for participation by children. My flight was delayed so I missed the outdoor concert but was able to catch three sets at the Local 269, a funky little bar at Houston and Suffolk (see video at end of article). 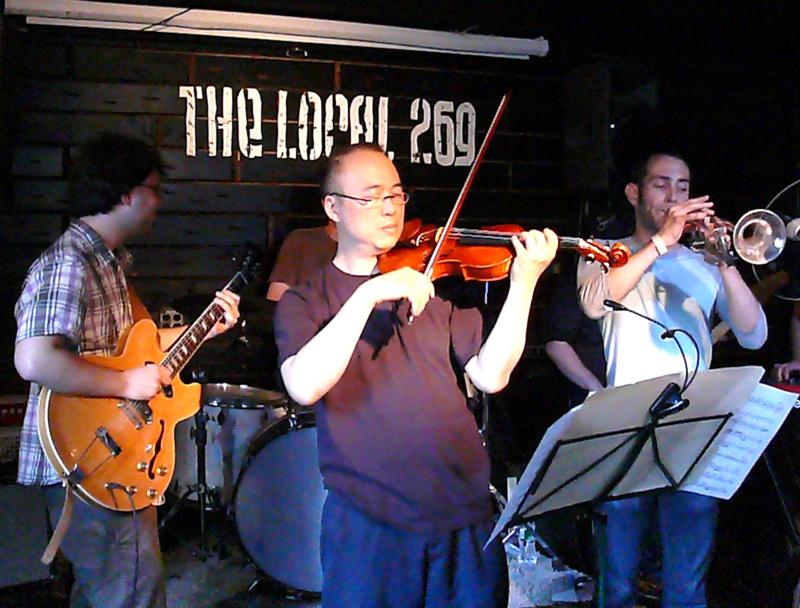 First up was the bright, loosely swinging Bradley Farberman sextet, which navigated six foot-tapping originals by the leader. Chris DiMeglio, an exuberant trumpet talent, threaded his fanfares around the riffs, alongside the masterful Jason Kao Hwang, in a pleasing front-line blend of brass and violin. Hwang alternated wah wah-ed violin with singing bowing, and fashioned some tender sighing glissandos in his spot on "See You Soon Baboon," while Farberman proved himself a neat guitarist, embroidering the rhythm with distinction.

Alto saxophonist Darius Jones emerged on the scene in 2007 seemingly from nowhere, almost the finished article, with an impassioned delivery accentuated by the unalloyed melodicism of his writing, with the sweetness tempered by a propensity for harsh discord. Jones brought in the trio which contributed the final bonus track to his acclaimed debut Man'ish Boy (Aum Fidelity, 2009) for one of the early highlights of the Festival. Adam Lane led off in hypnotic fashion with a cascade of resonant plucked notes, shadowed by Jones' alto, starting incrementally but rapidly building up a head of steam. Drummer Jason Nazary erected a wall of sound, rumbling mightily before Jones came in for the kill as Mr. Soul personified. Throughout, Jones indulged in all sorts of tonal variations matching Lane and Nazary's liberties with time.

Jones was unapologetic: "It's hot in here. I'm sorry, I'm just gonna make it hotter." He straightaway delivered on his promise, erupting into multiphonic squeals, backed by Lane's deep abrasions, extracted with bow in one hand and a stick in the other pressed on the fretboard. Lane's diminutive figure belied his full strong tone. A composer and bandleader in his own right, Lane brings a rich conception and chops aplenty to whatever he's involved in. His nimble fingering, pitched midway between riffing and walking, propelled Jones' charts, but then he would start toying with a riff, stretching it, interpolating out-of-time passages, and leaving it altogether briefly, sufficient to give even Jones pause.

Resembling a bespectacled math teacher, the drummer's scrunched up polyrhythmic barrage, moved in fits and starts but still convinced. In stuttering oddly voiced drum solos, Nazary at times reminded this listener of Whit Dickey in his taut intricacies. But Nazary, who also partners with Jones in the avant rock jazz unit Little Women, also discharged meatier fare, setting up rocky patterns and carpet bombing the beat. Responsive to what was going on around him, Nazary matched Jones gritty split-toned cries with explosions of knotty drumming. 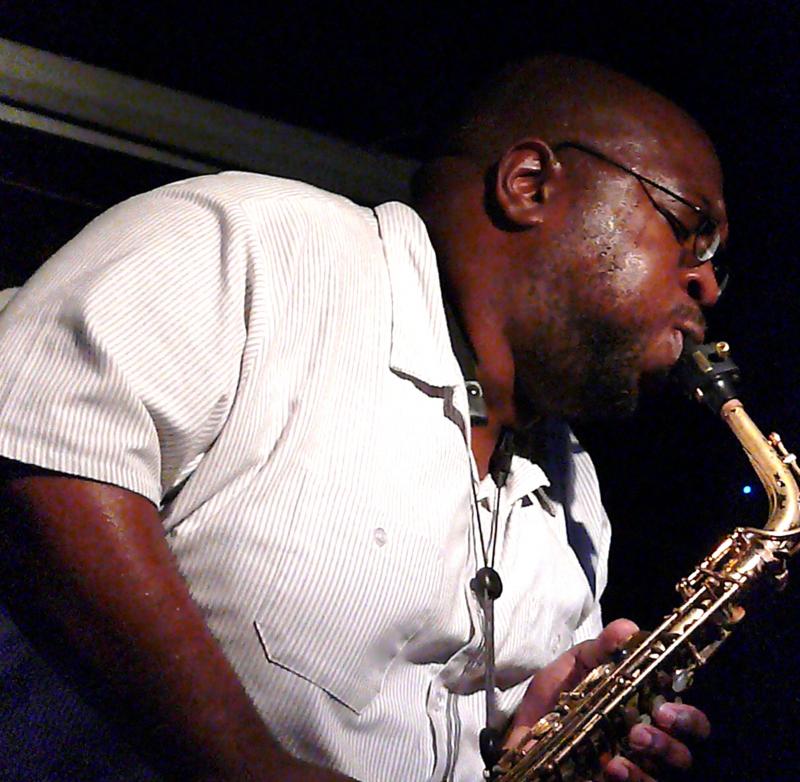 The climax of their set was "I Wish I Had A Choice," another of Jones' so-beautiful-it-hurts tunes, familiar to anyone who has heard his debut album. His introduction bespoke the weight of experience, saying "when you choose to walk this path, then you are on it—this has a lot of relevance to me." And indeed a lot of relevance to almost all the performers at this Festival, who perform as a necessity rather than as an economic decision. Without the Vision Festival their exposure would be even more precarious in the current economic climate. Introduced by slow sonorous bass and vibrato laden alto in sanctified mood, there was a keening searching quality to Jones' song. Lane picking with his eyes shut, gazing sightlessly at the heavens (or in this instance the TV monitor, relaying the latest in the World Cup), set up a spare backing for Jones' outpouring. The encore demanded by the small but euphoric crowd boasted another lovely Jones' outing with fluttering alto tremolos over bass and drum vamp for a rousing conclusion.

Tim Berne has been active long enough to need no cribsheet, numbering myriad bands and projects on his resume. Tonight's outfit was a new one, but proffered an excellent set. Monikered "Lowest Common Denominator," it reunited Berne with his old playmate brassman Herb Robertson, rounding out the lineup with current associate Matt Mitchell on electronics and Dan Weiss on drums. In recent years Berne has been part of Robertson's New York Downtown Allstars, so it was perhaps timely that the compliment was returned. Although Berne is a prolific composer, the music this evening came across as totally improvised, divided between two long organically evolving pieces, more about exploration and distortion, rather than rhythmic or melodic advancement.

Robertson established the template for the set from the start with amazing squiggling sonic spurts, soon joined by martial drums and wind tunnel whooshes from Matt Mitchell's electronic keyboard. Berne layered his passionate probing alto saxophone into the mix for a conference of parallel voices, at times seeming more dense than even the four constituents, almost overwhelming in the sheer variety of aural repast on offer. Flavor of the set was the contrapuntal hornplay, with Berne's jazzy fragments jostling against Robertson's more oblique trumpet and flugelhorn stylings. 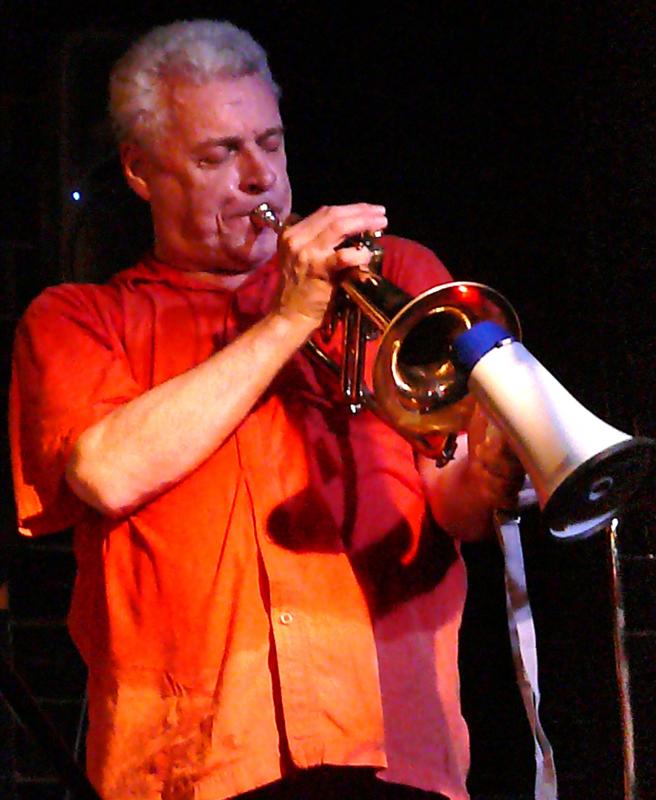 In fact, Robertson was characteristically full of unexpected effects and unusual note choices. Utilizing mutes to swoosh and splutter, removing some of the tubing from his flugelhorn and blowing with the body right up on the mic for pronounced effect, he made a good case for trumpet as theater. Not to be outdone in the search for the unusual, Berne inserted one of Robertson's mutes into the bell of his alto for muffled fractured cries. But Robertson trumped even that, initially using a megaphone to amplify his buzzing lip, modulated by a hat as a mute, before picking up a valve trombone while still in mid flow and maneuvering it so he could play the trombone through the megaphone. Such was the heat allied to Robertson's exertions that through the course of the evening his shirt turned from a pink to postbox red.

Even so, Dan Weiss turned out to be one of the key determinants: commentating rather than corralling, his bursts of rhythm that suddenly dissipated, timbral investigations, brief surges of time on cymbals and plentiful allowance of air, all serving to govern the character of the music. Weiss was always alert to what might fit, his face animated with fleeting expressions, sometimes astonished, other times curious, craning up like a meerkat at one point. Mitchell's beeps, and buzzes provided unconventional accompaniment. In one passage Berne's multiphonic squawks were met with a bird-like chattering from Mitchell.

Berne continued his search for novelty, extracting high squeaks from his alto by shoving a water bottle in the bell. Later he morphed into a siren-like "nee naa," before coming on so lyrical that he could be quoting a song, though his lyricism remained unrequited. Berne's strongest moments came as the ensemble came perilously close to a recognizable beat, at the culmination of the first piece where the reedman built a lacerating statement over the gradually coalescing momentum. Berne's sour-sweet alto soliloquy began the second piece over swirling electronic screeches. It provoked the thought that in any normal group Mitchell would be the wildcard, but not with Robertson in the band. With their intertwining lines the dialogue recalled those early Berne sides in the company of Robertson, but in a very different updated context.

By this time fatigue and jet lag had the better of me and I retired in spite of the lure of what was reported as a very good set by the collective Crackleknob. The opening night of the Vision Festival proper at Abrons Arts Center was a more realistic prospect, and there was great music on offer with Kidd Jordan and Roy Campbell's The Blues Escaped, Rob Brown's New Quartet, and best of all a reunion of William Parker's classic In Order To Survive.