Sunday June 27 was another big day for the Vision Festival. It began with the afternoon devoted to innovative New York College Bands, in another indication of how the Festival is strengthening links with community and educational institutions. However it was the evening which demanded attention, furnishing two storming sets from David S. Ware's new trio and Dave Burrell's Peace Out Trio, along with a surprise package from Perry Robinson's North/South Clarinet Ensemble.

Clarinetist Perry Robinson prefaced the first number by the North South Clarinet Ensemble with the story of how he had hooked up with fellow licorice stick man Dr. Michael White despite their divergent backgrounds. Robinson has been one of the leading lights in free jazz clarinet since the Sixties New Thing, while White has followed a more traditional star from his New Orleans home base, playing with Wynton Marsalis and founding The Original Liberty Jazz Band. 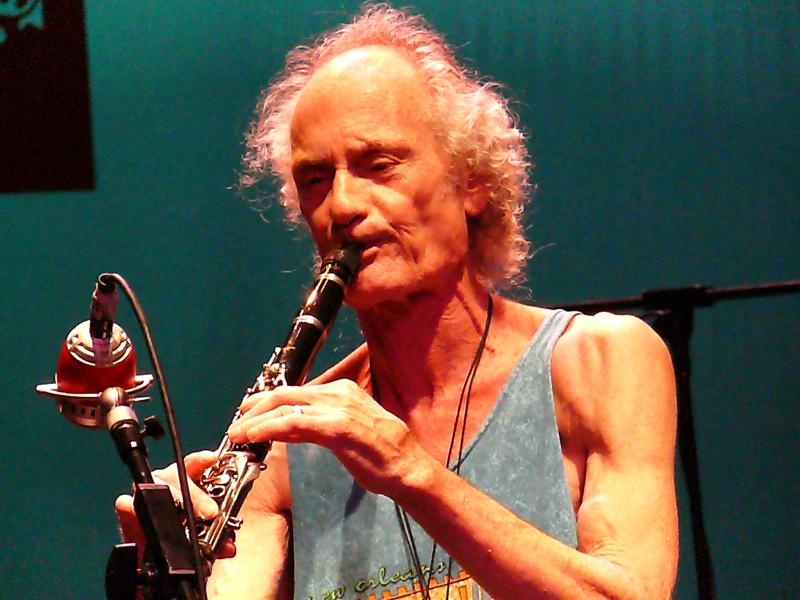 By way of introduction they began with a duo for their twin clarinets. Robinson called it "a little conversation"—and that's exactly what it was—one would have a turn and then the next in a polite game of tag. Not that there was anything too polite about the unbridled expression and soaring cries emerging from their reeds. White had fuller richer tone, while Robinson more often deployed multiphonics and split tones to color his klezmer influenced lines. They segued into Robinson's "The Call," first heard on Henry Grimes' ESP debut of the same name in 1966, with an Ayler-like theme, and free for all interaction, buoyed by the elegant churchy piano of Charles Eubanks.

Reflecting the title bestowed upon the band, Robinson's "North-South Meeting" contained a hint of "When the Saints Go Marching In" in its intensely soulful feel and blues cadence. Indeed the wonderful intertwining clarinets were a defining characteristic of the whole set accentuating the affinities in terms of collective improvisation between New Orleans jazz and the avant-garde. Robinson again deferred to White to take the first solo, full of gospel inflections, before a referential Eubanks piano outing, until finally Robinson's reedy tonal distortions took the tune out on a swinging high.

"We play off the inspiration of the audience. We feel your vibes" said White at one point. If that was so then the attentive crowd was clearly channeling some powerful stuff. White's "Death and Rebirth," was imbued with the spirit, presaging more New Orleans style freedom. The sparring clarinets egged each other on, over a dashing two beat rhythm, which bassist Ed Schuller and drummer Bob Meyer effortlessly shifted in and out of tempo. White belied his more conventional background and the clarinet pairing was charmingly empathetic and perfectly matched. 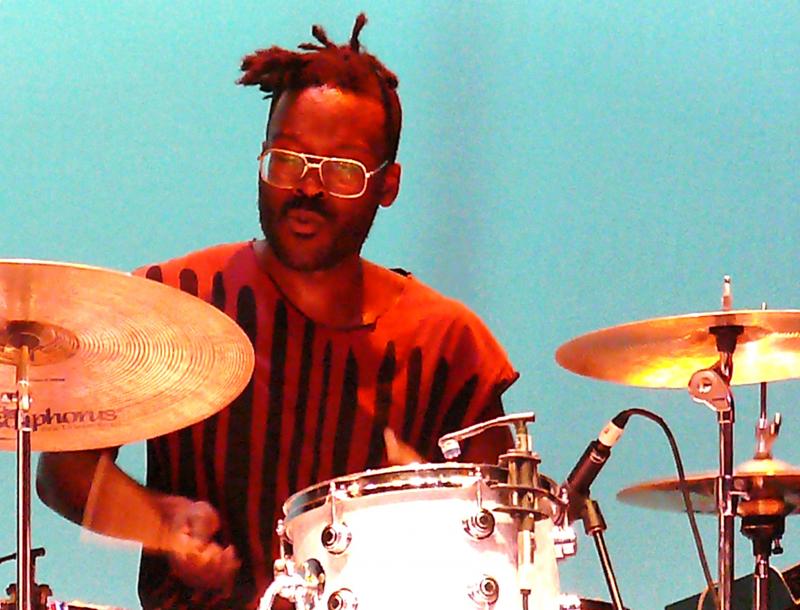 Guillermo E. Brown's Breuklen Tek Orkestra, manifest in the leader dancing around the stage as he sang. Presumably included due to his association with David S. Ware as the last drummer in the saxophonist's classic quartet, Brown's current direction didn't fit well with the rest of the program. As a result the 11 member band packed with percussion, horns and singers rapidly cleared out the first two rows of hardened festival goers. In spite of an extensive sound check the sound was muddy so that it was actually difficult to discern detail. There were no solos as such until Shoko Nagai got the nod from Brown. After setting up a repeating synthesizer pattern she turned to the piano for a brief fling. A fine player, she was drowned out as the band returned in force. Brown engendered an improvised approach to funk, directing arrangements on the fly before moving behind the drum kit for the final number.

Billy Bang Tribute to Sir One

A special presentation was made to violinist and composer Billy Bang at the outset of his set, with assembled friends and colleagues gifting him the sculpture which pictured on the cover of his Sweet Space (Anima, 1979) album. There was a poignancy to the award, not because it was not well deserved, but as the violinist has been battling lung cancer and appeared much frailer than at last year's Vision Festival. His performance was dedicated to Sirone—the bassist best known as one third of the Revolutionary Ensemble, along with Leroy Jenkins and Jerome Cooper—and Bang related the tale of how he was sometimes nicknamed Sir One. Perhaps as part of the tribute, the violinist employed an additional bassist Dave Grodin in his lineup alongside Hilliard Greene. Both were involved from the off, deploying a deep buzzing arco drone, augmented by cymbal washes and spare piano from Andrew Bemkey. Bang layered his heartfelt violin lines over the top with a somber chorus from trombone and bass clarinet. 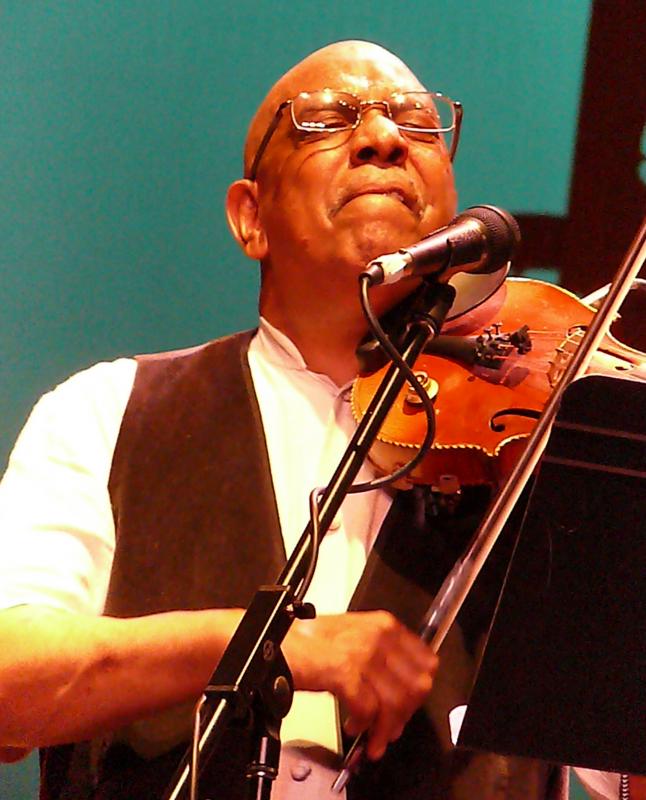 As often the case, the leader chose to orchestrate in the moment, cueing up features for first Grodin, then the clarinetist Henry Warner, a little known player from the loft era who cropped up on albums by William Parker, and Bang and worked with Sun Ra, Wilbur Ware and Frank Lowe but has been largely under the critical radar since. Seated with a walking stick, the 70-year old Warner looked frail and suffered from being undermiked so that he sounded somewhat breathless and it took his overblown squawks to penetrate through the ensemble.

ADVERTISEMENT
A second piece—"Dark Silhouette"—again began with the two bassmen, pizzicato this time, supplemented by tapping on the body of the basses before catching a descending riff. Trombonist Dick Griffin built a fine outing off the vamp, showing the full range of dynamics at his service from low growls to the highest thin squeals. There was clearly something inspirational about the tune as Bemkey's long unfurling piano spot was also exemplary. Bang himself closed the piece out with a keening frantic statement, more anguished and dissonant than his usual joyous fare. Though not achieving his former irrepressible energy levels, Bang gave it his all and the band closed to great cheers. Get well soon Billy.

With an astonishing acapella tenor blast to start, saxophonist David S. Ware made a forceful declaration that he was back and in top form following his kidney transplant. It was a sustained shout out, extended by circular breathing, which carried on from where the triumphant final track of his solo Saturnian (AUM Fidelity, 2010) left off. 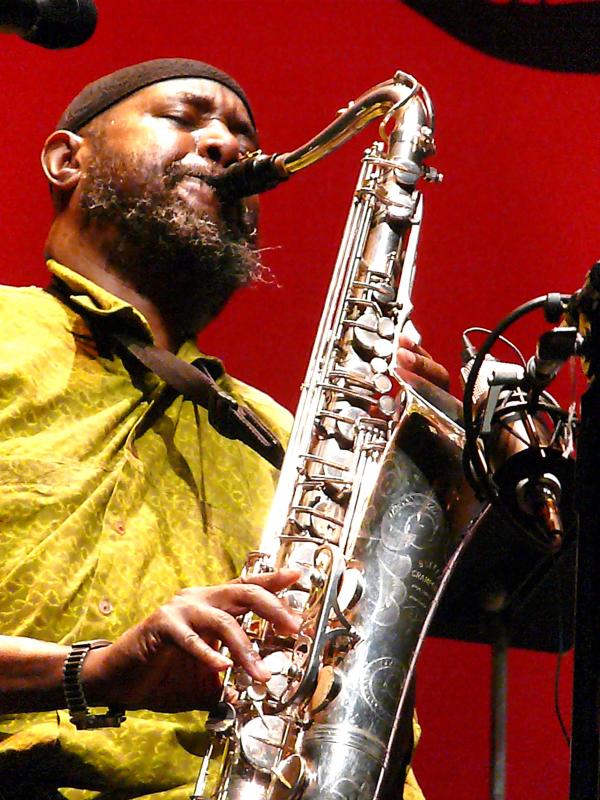 After establishing his credentials, Ware brought in the seasoned combo of William Parker on bass and Warren Smith on drums for quicksilver support in a completely improvised set. Ware sat centre stage with Parker and Smith flanking him to the rear, defining what this show was about in graphic form. Though seated throughout, the reedman's musical powers were undiminished: he was technically assured and pushing the boundaries with undoubted stamina in an amazing outpouring. Good news then that a new recording from the trio will be released later in Fall 2010.

Smith and Parker encompass so much free jazz experience that it could be taken as read that they imparted open yet propulsive backing, alert to Ware's trajectory, yet continually offering further options for travel. Smith in particular bestowed a spacious quality through his accompaniment which allowed the music to breathe, whether starting a bounce with mallets or marking time on his hi-hat, which suited the hornman down to the ground in providing reference points against which he could pitch his emotionally charged rapture.

Parker effected trenchant commentary, allied to timbral variation in his featured spots, as when he applied his patented karate chop hand movements on the strings of the bass, producing ringing harmonics. He also exerted control over the tempo, increased velocity of his stream of thick resonant notes prompting the saxophonist to move from yelps to gobbling runs with honks in the interstices. Ware's lines were majestic and sleek, making passing reference to some compositional material, before yet more dog whistle extreme tightrope walking. Against a backdrop where so many of the elders of the music are dying or ill, Ware and his continued comeback makes for significant and welcome news. This set was one of the Festival's stand out occasions, and for all the right reasons. 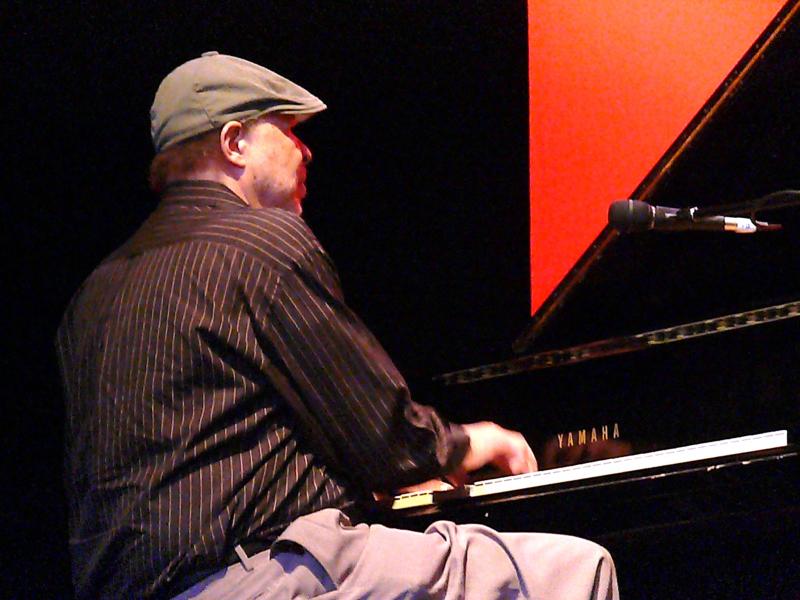 Demonstrating that an extemporized session doesn't need to lack in inner structure or design, pianist Dave Burrell announced that the name of this set as "Inner Earth," before laying down an opening motif of repeated hammered chords. Burrell trinkle tinkled at the treble end of the keyboard, then flipped over onto the backs of his hands as he surged down to the bass register. Out of kilter stride, discordant plonks, and a one fingered Morse code stutter were all well-used weapons in the pianist's arsenal.

Burrell's rhythmic style and knowledge of jazz history make him an ideal partner for drummers, as testified by his marvelous duet with Billy Martin (of Medeski Martin & Wood) Consequences (Amulet Records, 2006). Indeed a remarkable synergy developed between the pianist and drummer Hamid Drake. As the Chicagoan whipped up a flurry, Burrell responded in kind with wild glissandos along the keys until the drummer crescendoed and the pianist returned to his Monkish dissonance. As a fast jazzy section took shape, Drake immediately switched to playing time, into which Burrell interpolated a boisterous syncopated attack, until Drake began to hurl the pianist's rhythmic patterns back at him in a dizzying exhibition of seat of pants navigation. 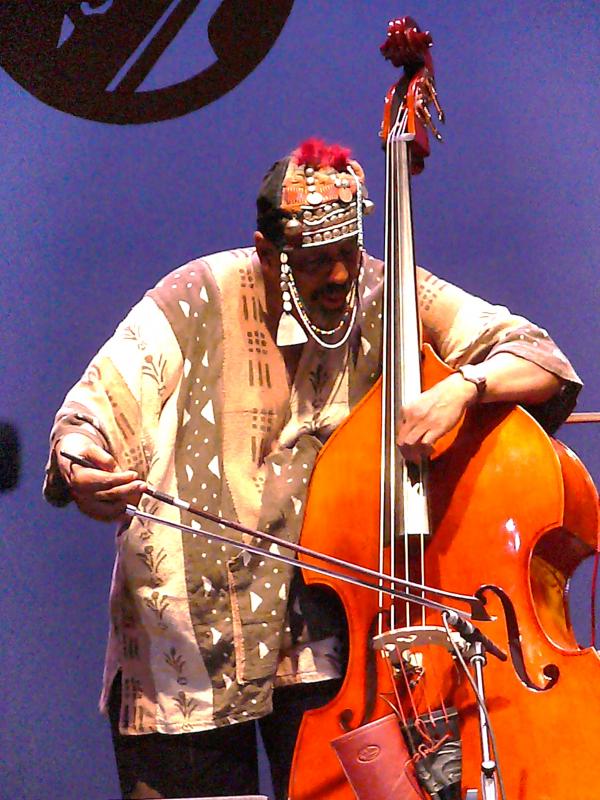 For his second appearance of the evening, bassist William Parker effected a complete change of costume from the previous set, now resplendent in beaded and embroidered headgear and patterned poncho style shirt. With the option of interplay with Drake curtailed, Parker maintained propulsion, not by the default route of walking, but his own method of short bursts of skipping, hopping, sprinting, and jumping merged into a creative arc. As the set progressed, the opportunity for a Drake drum masterclass emerged: intricate figures flowing smoothly around the kit, while Parker unsheathed his bow and Burrell jangled in support. In Parker's solo he really dug into his arco work, getting into a groove subtly varying the hypnotically recurring tracery, then breaking out with a catchy pizzicato phrase. Illustrating their multifaceted rapport, Burrell picked it up as a motif to transition into the next section, intensifying the riff until culminating in torrential chording.

Transitions evolved organically out of what came before such that it was sometimes difficult to recall how they arrived at some dancing juncture, having been immersed in thunderous tumult just moments before. A tolling chord from Burrell and Parker's bowed response seemed to signal closure. But the spirit was still with Burrell. Just as Drake began winding down, the pianist threw in an ascending glissando with the heel of his hand for a brief tempestuous passage before the finale, as if to say there could be a lot more where this came from. This lineup has yet to record, but having scored yet another Festival highpoint, listener's can only hope that oversight is quickly rectified.

After such a fantastic evening's entertainment it would be churlish to wish for more. But surveying the schedule for the Monday evening, two shows held special promise: a reunion of the all star Stone Quartet with Marilyn Crispell, Joëlle Léandre, Mat Maneri and Roy Campbell, and a rare appearance by the duo of trumpeter Wadada Leo Smith and German percussionist Gunter Baby Sommer.