After the exceptional programs for the first two nights of the Vision Festival at the Abrons Arts Center, the Friday night show was always going to find it hard to compete. That seemed to be the view of many of the regulars who found offerings elsewhere more to their liking in the never-ending jazz festival that is Manhattan. Nonetheless there were more than enough intriguing sounds to be heard and fine musicians to appreciate.

After a slight delay the irrepressible Fay Victor commenced softly murmuring and whispering, flanked by gossamer stirrings from Ken Filiano on bass and Anders Nilsson's pointillist electric guitar. Drummer Michael TA Thompson, presumably the cause of the hiatus, appeared behind his kit partway in. Victor's expressive delivery manifested itself not only in her free form vocals, but also her animated back and forth swaying, as she stood resplendent in her black dress. Her band moved between improvisation and songform with ease, but responded in kind as she brewed up a vocal storm, with guitar histrionics and repeating electronic effects pedal swells from the bass. 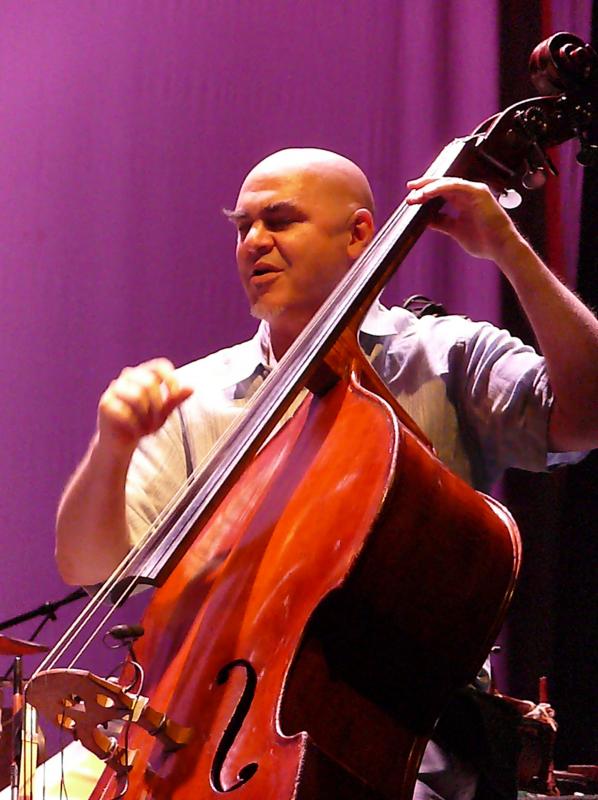 Filiano, who has become one of the premier bassists on the scene (witness his stellar contribution to Bill Dixon's Tapestries For Small Orchestra (Firehouse 12, 2009) for a pertinent example) was outstanding here: his pizzicato features so melodic, mellow and graceful, while his lush arco work just soared. Filiano excelled at sensitive accompaniment: his slurred notes blending perfectly with Victor's melismatic vocals. There was ample space for both him and Nilsson to parade their wares, with linking solos in a suite of three numbers from her Ensemble's sophomore effort The Freesong Suite (Green Avenue Music, 2009), as the guitarist ranged from bluesy funk to gritty improv, while Thompson's drums yielded solid but unobtrusive support.

At times it was hard to avoid the feeling that the material would be stronger without the sometimes quotidian lyrics, though the singer's phrasing couldn't be faulted. Rounding out the set were two further tunes: the first rocky, founded on a drum and bass riff, which saw the bassist bowing manically; and a closing dedication for Fred Anderson and Bill Dixon, which began with a wonderful singing arco threnody from Filiano, with subtle brushes and guitar accents, which evolved into a gentle lullaby for a counterintuitive close.

Sabir Mateen's seven piece group combined strings and percussion in a talented selection capable of formidable firepower. A percussive duet by Warren Smith and Michael Wimberly made for a deceptively understated opening, before expectation was fulfilled as the whole band hit. Splendid as this was it served to accentuate the uncharacteristically muddy sound when the massed ranks opened up in unison. Mateen orchestrated the band from stage left, cueing ensembles, soloists and governing the overall dynamics. Although packing impeccable free jazz credentials, the reedman also brought in composed material, which furnished firm footing amidst the swirling collective maelstrom. 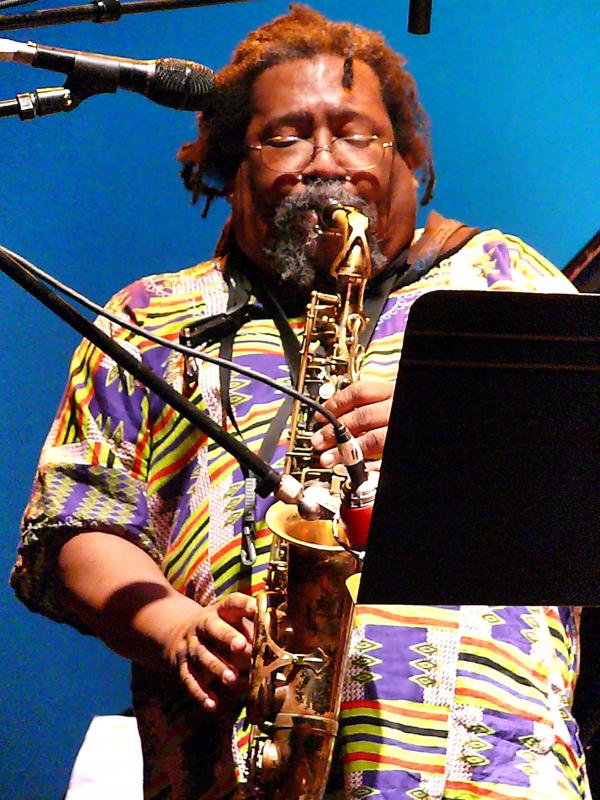 Mateen sought to engineer contrasts, at one point stilling the onslaught to allow a Daniel Levin's cello solo around which the band's lines gradually coalesced. He drew a range of textures from the possibilities innate within the group. A double cello section for Daniel Levin and Jane Wang, with Smith on marimba was a prime example of the exotic combinations which could emerge from flow. But the default was the leader going for broke on his arsenal of reeds, with supporting figures erupting from within the ensemble. As one such passage subsided for a Wang bass solo, Mateen again signalled his intended juxtapositions by overlaying a melancholy theme.

The individual components were impressive. Pianist Raymond A. King proved another in the pantheon of the undersung, little known outside his native Philadelphia, but inventive in his freewheeling comping while wildly explosive in his featured spots. Incidentally King's artistry was not confined to the keyboard, as it was he who also designed the stage set, featuring paired portraits of Festival dedicatees along with other avant icons such as Sun Ra and Cecil Taylor. Jason Kao Hwang plucked and bowed to great effect, while Wang made manifest her facility for extended technique, bouncing a mallet off her strings and even off the bridge itself. As a soloist, Mateen, was peerless, his alto clarinet revelling in nasal honks, while on tenor saxophone, probably his strongest horn, he flowed from the guttural depths up to falsetto register and beyond.

There was an organic quality to the music at its best with a feel of inevitable development, like Mateen's clarinet excursion with the strings extemporizing a fragmented counterpoint, which belied the more tentative transitions. Finally a mournful air for the leader's tenor and Levin's cello morphed into a heartfelt saxophone cushioned by the strings to finish. Sadly the poor sound meant that the promise inherent in the line up was never quite confirmed. 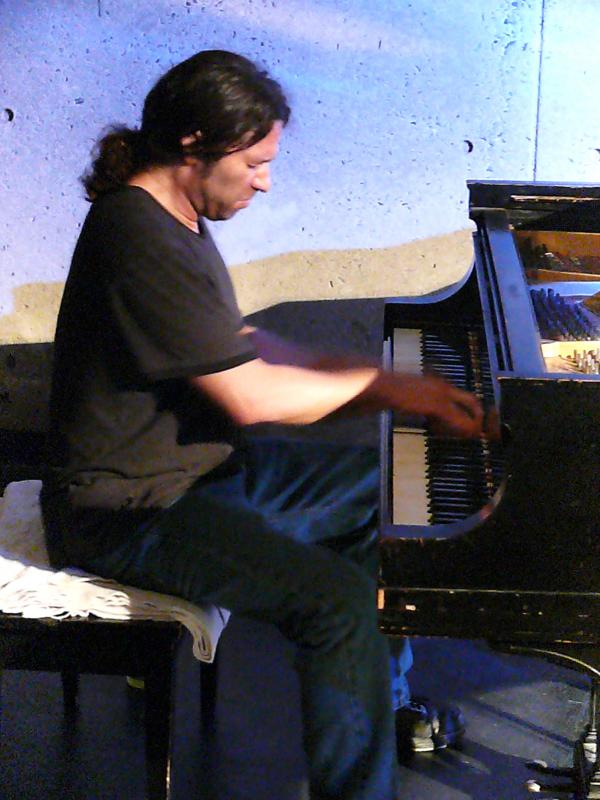 Starting 90 minutes later than schedule due to Jackson Krall's delayed arrival, pianist John Blum's much anticipated set took flight in front of a diminished audience in the lower auditorium. Though the pianist is a little known quantity outside New York, with a 1998 recording of the excellent Astrogeny Quartet (Eremite, 2006) and recent collaborations with Steve Swell's Slammin' The Infinite, such as 5000 Poems (Not Two, 2010) being his most widely distributed showings to date, he ably demonstrated why he is held in high esteem by the cognoscenti. Once Krall's kit was set up, a brief "are you ready Jackson?" was the only preliminary as they leapt in without looking back. While Blum traded in bursts of volatile sound, Jackson pressed in waves. At first the pianist stabbed the keys with fingers, then flats, palms, heels, of his hands, before his fists were flying at the two extremes of the keyboard in a high energy exposition. All the time his eyes remained closed as if channelling inspiration from some unseen source. Though they didn't look at each other they were nonetheless responsive. So it wasn't all thunder and lightning, as Blum etched occasional delicate sections which the drummer reciprocated by reducing the density and volume of his wall of sound extracted from a cut down kit.

It may be that Blum's period in the wilderness is about to come to an end, as a pair of remarkable new releases under his leadership are now available. Most marketable is his trio In The Shade of Sun (Ecstatic Peace, 2009) with the all star rhythm section of William Parker and Sunny Murray, but it his perhaps his solo disc Who Begat Eye (Konnex, 2009) which will stand the test of time, forged as it is from the inexorable power and intensity also on display this evening 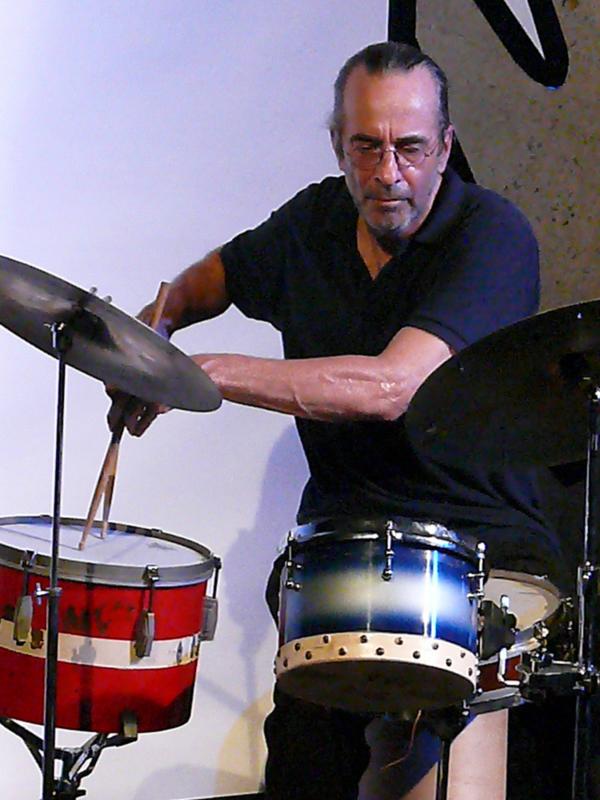 Krall started their second duet quietly, sticks upended on his tom, crescendos on cymbals abruptly stopped by his hands, and fingers rubbed across tom head for booming tones. A more open piece to begin with, it also included some pleasing synchronicities. Blum pawed at the extreme treble end of the keyboard to match Krall's tumult on cymbals. This was very full on free jazz—a take no prisoners approach which you either love or hate. I'm with Cooper-Moore, who was paying close attention to Blum's playing throughout and encouraging him with shouts of "yeah baby."

Blum attacked his piano as you might play congas with flats of the hand at high speed, but then mixing in passages of such dexterous digital articulation that his hands were mostly a blur. Towards the end a blocky interlude reminiscent of Cecil Taylor contrasted with fast almost melodic runs for a rousing conclusion. An excellent set, but at little over twenty minutes, way too short as they had to give way to the next act before the hall closed. As Blum said afterwards as the sweat poured off him: "I was only just getting going."

While waiting so patiently for them to start I missed two other acts in the main theater: Jane Cortez and the Firespitters and Amiri and Amina Baraka wordmusic. But recompense was on hand with a long day in prospect for the Saturday, showcasing emerging artists in the afternoon, followed by a full evening's fare including Charles Gayle's Bass Choir, Ned Rothenberg, Borah Bergman and Mark Helias' Mark Helias Open Loose.