By KURT GOTTSCHALK
April 16, 2007
Sign in to view read count 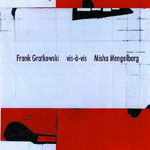 Misha Mengelberg's legacy, through his ICP Orchestra, will be as a pianist who is a unique jazz interpreter and bandleader with a devotion to Herbie Nichols, Monk and Ellington. And while he's made his own mark, it's only part of the story.

At the helm of the ICP, Mengelberg leads jaunty, jazzy ditties, loaded with melody and humor. But on occasion, other sides of him seep out. Mengelberg, the son of a symphony conductor, was classically trained in his native Netherlands and while that background shows through at times with the ICP—he seems happiest when the group gets revving and he can sprinkle slight notes atop them—it's much more apparent in some of his projects outside that group. His solo CD Impromptus (FMP, 1988) is an elegant, if less than serious, set of miniatures, owing as much to Satie as anything in the jazz canon.

Likewise his duo with the German saxophonist Frank Gratkowski is improvisation that more often follows 20th century European composition sound forms than traditional jazz structures. Gratkowski is more often the one pushing the program while Mengelberg circles behind, but when on occasion he pushes hard, the pianist follows. The six tracks (clocking in at sixty-seven minutes) ultimately are more in line with Gratkowski's discography, but help to fill in a small gap in Mengelberg's and quite nicely at that.