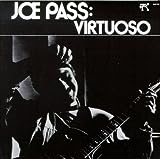 When considering all the talent that exists in jazz, there exist damn few musicians who can be deemed without peer. Art Tatum and Charlie Parker might be considered as such; Joe Pass might be the definition of a musician without peer. Pass arrived magically on the recording scene in 1962 with The Sound of Synanon (Pacific Jazz 48) named for the famous drug rehabilitation facility whose alumni include Art Pepper, among others.

This was not the true beginning of his career. Pass was active in the late 1940s with big bands, including Charlie Barnet’s. Pass spent most of the next decade heroin-addicted and serving time in prison. After Synanon, it would be another decade be fore he truly arrived— and arrive he did in 1973 with Virtuoso. With this recording, Pass demonstrated that a guitarist could play the melody, bass line, and solo all at the same time— and all this on up-tempo pieces like "Cherokee" and "How High the Moon." Pass went on to record many more such albums for the Pablo imprint, but this is where it all began. The remastering gives back the analogue warmth absent from previous CD releases. Welcome back, old friend.