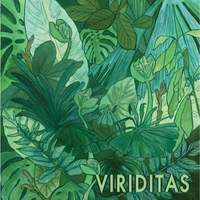 Saxophonist Ben Cohen is currently based in Brooklyn, but it doesn't take long to figure out that he hails from elsewhere: rural Tennessee, to be exact. His rootsy, earthy tenor sound reveals a background as steeped in folk music and the blues as in avant-garde jazz, giving his voice an accessible edge that should serve him well as he gains wider recognition. He recently founded Eschatology Records as a vehicle for his music, and on Viriditas, the label's first release, he's joined by bassist Ross Gallagher and drummer Deric Dickens for a set of infectious tunes that are both adventurous and highly engaging.

Starting with the album's opener, "A Ramble," one is instantly reminded of one of Cohen's antecedents: the classic Ornette Coleman quartet, whose "Ramblin'" (on Change of the Century) was emblematic of Coleman's folk and blues-based pathway to the avant-garde on which Cohen and his bandmates are continuing to journey. Gallagher's big, open sound on the bass is reminiscent of Charlie Haden's pivotal melodic role in his work with Coleman; like Haden, instead of casting the instrument in its conventional supporting role, Gallagher contributes heavily to the tuneful quality of this music as an equal, with lyrical statements that help to establish and advance each melody.

Although all three players offer impressive technique—Cohen, for instance, plays multiple simultaneous saxophone parts on a few of the songs, lending harmonic richness to tracks like "Child's Play" and "Viriditas"—this is not an album in which virtuosity is an end in itself. Indeed, one of its most striking qualities is the amount of open space on the record. Aside from "Mutt," where things get a bit wild and woolly with Cohen's growls over a driving beat, most of the music stays on the ruminative side, with Dickens's unhurried, open-ended drumwork providing plenty of room for Gallagher's and Cohen's melodic excursions. "Sparrows" is the perfect example: guided by Gallagher's articulation of the melancholy theme, Cohen's soprano soars and flutters in true avian fashion, while Dickens provides a graceful, sympathetic accompaniment on brushes that is able to sustain the track's gentle momentum while avoiding an obvious pulse. Some listeners may want a bit more feistiness here and there, as there is a restrained feel to much of the album—but truth be told, the tuneful beauty of the tracks is really the record's strength, and it's to the players' credit that this remains their focus from beginning to end.

Once the chorale-like closer, "Viriditas" finishes up the album, we're definitely left wanting more. Here's hoping that Cohen's fledgling label will have the opportunity to provide it in the near future.