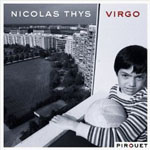 Nicolas Thys settled down to play the acoustic bass after transitioning through the piano, flute and electric bass. After his academic days, he spent eight years in New York City, where he integrated into the jazz community and set up a long line of collaborations before moving back to Europe. The Belgian native has played with some of the best, among them Lee Konitz, Tomasz Stanko, Nils Wogram, Simon Nabotov and the Brussels Jazz Orchestra.

Thys writes some effective music. Much of it has a placid air, quiet in its disposition, with an underpinning of the rhapsodic. Making it all the more potent is the band that Thys assembled specially for this recording. Their empathy and interplay are factors that elevate the music, adding to the punch with ideas that come in unexpectedly.

Chris Cheek's warm tenor saxophone daubs "99 Oceans" with pastel shades. He luxuriates in the melody, styling it with articulate phrases, improvising within that sphere without cramping his ideas and then journeying out by changing pitch and adding space. The direction shifts when pianist Jon Cowherd takes a surprising line into the blues, one he plumbs with a delightful swell of inspiration.

"Virgo" glistens like spun silk. Cheek is the main progenitor, his companion in invention being guitarist Ryan Scott, who wipes the ballad off the slate with a gradually increasing volatility as he bends his strings and springs into rock terrain; the twin attributes profiling a stunning turn of invention. Drummer Dan Reiser adds to the momentum with shifting accents in cleave with Thys' supple bass lines.

Though his main focus is on the sublime, Thys also writes tunes that jump and swing. "Disco Monkey" sways into bop, while "G Brazil" reinvents a Latin rhythm that flows as an undercurrent. Both are a happy and joyful presence that give the CD a fine balance.