By DERRICK BANG
May 8, 2012
Sign in to view read count
This article appears in the prologue of Vince Guaraldi at the Piano by Derrick Bang (McFarland Books, 2012).

Prologue: "The Sound of Surprise" 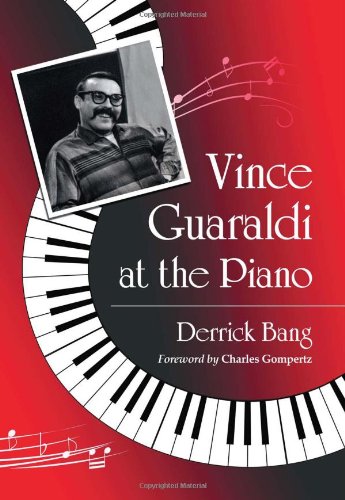 It had been a busy day; indeed, it was already a long three-day weekend. Headliner Louis Armstrong—introduced by emcee Dizzy Gillespie—had helped lure a crowd of roughly 5,000 jazz fans to Friday evening's opening-night performances, although one critic was much more impressed by an earlier set from pianist Burt Bales' "boisterous, stomping band," with its crowd-pleasing riffs coming from clarinetist Vince Cattolica, trombonist Skip Morr and bassist Bill Smith.

New emcee Bobby Troup brought Gillespie back to the stage in a performing capacity, as the jazz legend's quintet kicked off the Saturday evening program at close to 9 P.M. Gillespie was followed by the Jimmy Giuffre Trio; they passed the torch to Gerry Mulligan's combo, which boasted trumpeter Art Farmer, bassist Bill Crow and drummer Dave Bailey. Mulligan's group then yielded the stage to the Max Roach Quintet. Next up: the Modern Jazz Quartet and vocalist Ernestine Anderson.

By now, the witching hour had come and gone. An appropriately eerie fog should have dampened spirits as the temperature—invariably chilly along the Monterey Peninsula, even during early autumn—dropped further. According to box-office receipts, 5,912 jazz fans were jammed together for this wonderful onslaught of music; they should have been tired, man!

Still to come, on Sunday, were the Dave Brubeck Quartet, the Harry James Orchestra, Benny Carter, Buddy DeFranco, Sonny Rollins and Lady Day herself—Billie Holiday—along with return appearances by Gillespie, Mulligan, the Modern Jazz Quartet and many of the other musicians who had made Monterey their home for the cheerfully rowdy weekend.

Reasonable people therefore would have headed home to bed, in order to recharge for Sunday's rousing festival finish.

But no, here it was, after midnight Saturday—already into early Sunday, in other words—and the fans still wanted more. They had grooved to great licks from top-flight musicians—interrupted, far too often, by the roar of overhead planes flying to or from the Monterey Airport—and were worked up into a toe-tapping, finger-snapping frenzy.

At this late hour, facing a crowd that massive—that energized—even a seasoned celebrity might have thought twice before offering dessert after such a sumptuous, multi-course meal. Imagine, then, the likely anxiety of the five young men who quietly walked onto the stage. They even had to introduce themselves, Troup having retired for the night.

"It's getting kinda late in the morning ... early in the morning, late in the evening," the striking, clean-cut band leader fumbled. "I'm Cal Tjader, and I'd like to introduce the guys in our regular quartet."

Tjader must have been gratified by the burst of applause resulting from these few words, because his voice became clearer and more confident. Polite clapping greeted each of his sidemen, as they were introduced in turn.

"We have, on piano, Vince Guaraldi ... and, on bass, Al McKibbon ... and on drums, Willie Bobo. And we're very happy to have, as a guest with our jazz quartet, the very wonderful clarinetist who needs no introduction at all, Buddy DeFranco.

"We'd like to start things off with George Gershwin's very wonderful tune from Porgy and Bess, 'Summertime.'"

The crowd murmured approval at this choice, then settled into quiet silence as Tjader's mallets gently and impeccably opened with a few bars from the opera's "Catfish Row" theme. Guaraldi, McKibbon and Bobo woke potentially drowsy listeners with four sharp unison fanfares; Tjader slowed the straight-time tempo to a crawl, almost a stop...

...and then the band launched into a bluesy arrangement of "Summertime" that would have had everybody dancing in the aisles, given enough room. DeFranco took the first bop-hued solo, Guaraldi's piano adding harmonic counterpoint as Bobo's drums rose, just slightly, in volume and intensity. McKibbon's bass slowly fought to the foreground as Bobo inserted a double-time riff, and then DeFranco surrendered the lead back to Tjader, and to the song's first spontaneous burst of applause.

Bobo's foot-stomping two-beat became stronger as Tjader worked the vibes, hanging on unexpected notes, drifting from and back into the melody line. All five men could be heard talking just below the music, trading encouraging and triumphant comments: a dialogue of enthusiastic chatter every bit as deftly choreographed as the music.

Tjader faded away from his extended solo—more applause—and then it was Guaraldi's turn. The pianist teased a sultry, sassy, single-note melody from his instrument: runs and trills from one end of the keyboard to the other, carrying echoes of Red Garland—always, in interviews, one of Guaraldi's favorite influences—and all strongly suggestive of Gershwin's core melody, but each somehow its own distinct variation. The runs became faster, more complex, more flamboyantly out there ... and yet, still, listeners could detect the Gershwinesque elements needed to evoke that same core melody. Guaraldi shifted to chords, now grooving smoothly to McKibbon and Bobo's steady beats; then, suddenly, the pianist all but mashed the palms of his small hands into the keys, extracting pleasing sounds seemingly through sheer force of will.

Guaraldi subsided once again to a supportive position—to a very enthusiastic burst of applause—and McKibbon took over. Tjader returned to the foreground, DeFranco's clarinet now adding some shading, as the guys brought the song home.

This was smooth, seemingly effortless musical synergy: slightly more than 13 minutes of delectable work on a song whose simple, repetitive melody had become (and would become, for decades yet to come) redundant and boring in lesser improvisational hands.

The applause now was longer, louder: Folks were paying attention.

After a fast countdown, Guaraldi swung into the saddle with the lively eight-bar opener to Charlie Parker's "Now's the Time." If the combo's first number had been smooth and swinging, this was closer to jump jazz, Bobo and McKibbon laying down a rapid beat that took no prisoners. DeFranco once again earned the first lengthy solo, Guaraldi comping chords behind the sparkling clarinet riffs. The intensity built, DeFranco somehow remaining in front of the piano, bass and drums, all of them chasing the clarinet into ever-brighter bursts of crowd-pleasing sound.

Then, after DeFranco's well-deserved round of applause, came The Moment of Awesomeness.

"The hero of the set was pianist Vince Guaraldi," wrote one critic. "The little San Franciscan came closer to winning a standing ovation than any other performer. Digging in solidly, Guaraldi worked on 'Now's the Time' with such vigor that the entire group was inspired to provide some of the most stimulating music of the evening."

Guaraldi was all over the keyboard; he whipped through an invigorating solo that brought not just applause, but also cheers. Tjader, retrieving the lead, rose to the challenge, his hands a blur as his mallets flew. Bobo and McKibbon picked up the pace and intensity. Then, suddenly, it was less a solo and more a duet, with Guaraldi's chords sharing the same exhilarating musical space as Tjader's melody line. Another burst of applause, and then McKibbon earned another turn in the spotlight, playing with enthusiastic vigor.

When the song concluded, 14 minutes later, everybody in the audience knew they'd been present for a glimpse of jazz perfection: one for the history books. This was one of those moments described by New Yorker jazz columnist Whitney Balliett as "the sound of surprise": a rare flash of shared improvisational magnificence that all jazz fans hope to experience at least once in their lives.

(And yet, despite the significance of this performance to the careers of both Tjader and Guaraldi, an entire half-century would pass before the public-at-large could share the moment, with the long overdue 2008 release of The Best of Cal Tjader: Live at the Monterey Jazz Festival. This magnificent CD opens with the entire, never-before-released 1958 set. Sheer wonderfulness, as Bill Cosby might have said.)

DeFranco left the stage after this number, to an appreciative round of applause; he was replaced by Mongo Santamaria, whose vibrant work on congas highlighted the subsequent Latin-hued bossa nova numbers. The musicians launched into a peppy rendition of Ray Bryant's "Cubano Chant," followed by an equally vibrant sprint through Tjader's own "Tumbao," the latter a ferocious descarga (a style of Cuban music designed as a dance-laden "jam session"). Both of these heavily percussive numbers were short, leaving little room for solos, although the crowd clearly enjoyed the rhythmic hijinks from both Bobo and Santamaria.

Guaraldi comped chords in "Cubano Chant," then contributed little more than two redundant, single-note refrains for the early stages of "Tumbao." More than likely, listeners weren't paying attention to him anyway; everybody was mesmerized by Santamaria, who went absolutely nuts on the congas. Even Tjader barely got a mallet in edgewise.

When the quintet hit the final unison chord and broke, the crowd went absolutely berserk: cheers, a thunderous wave of applause and delighted shouts of approval. Clocks were pointing to 1 A.M., but the fans couldn't have been sleepy at this point; Tjader's combo had delivered a jolt of adrenalized sound far more invigorating than half a dozen cups of coffee.

"Vince completely broke up the crowd," acknowledged another attendee, commenting on this performance years later. "[Everybody] screamed for more until festival officials doused the stage lights. It was clearly the greatest ovation given any artist at the festival."

For Guaraldi, though—despite the ego-boosting roars of delight over his solos that night, and despite generous words in the subsequent reviews—the accolades must have felt like a Pyrrhic victory. He had, in the eyes and ears of 5,000 or so fans, just established him- self as a sensational sideman. Despite his comfort when playing with Tjader—the two eventually would make a dozen or so albums together—Guaraldi had higher ambitions. He wanted recognition for leading—and recording with—his own band. Indeed, he had already done this, having released two albums through Fantasy Records: The Vince Guaraldi Trio (September 1956) and A Flower Is a Lovesome Thing (October 1957). But despite encouraging reviews, both LPs had been financial stiffs; Fantasy had opted not to continue his recording contract.

In other words, Guaraldi already had failed—twice—to snatch the coveted brass ring of name-brand recognition. Being heralded for his support in Tjader's band, no matter how splendid, merely meant being consigned to the purgatory that most sidemen endured in those days, their names frequently left off album liner notes, and rarely—if ever—included in newspaper advertisements for club gigs.

Guaraldi was facing potential anonymity. Nor was that situation to change, during the next few years. But when it did change, things happened very, very quickly...

Learn more about Vince Guaraldi at the Piano. © 2012, Derrick Bang 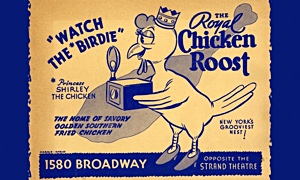