By JAKOB BAEKGAARD
October 31, 2018
Sign in to view read count 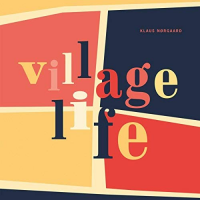 Some albums seem to capture a season perfectly. Jazz bassist Klaus Nørgaard, a mainstay of the Danish scene, has done this with Village Life, an album that brims with autumnal delight. The track "August Dance" is the equivalent of watching many-colored leaves dance in the wind. Drummer RJ Miller makes a light beat like castanets. He is accompanied by the elegant horn duo of saxophonist Ned Ferm and trombonist Mads Hyhne.

At first, Nørgaard does not command much attention, but listen and the fluid pulse of his bass is everywhere. Notes are gently plucked like ripe apples from a tree. Nørgaard takes the time to let the music breathe. He helps to provide the elusive quality of jazz called swing, taking a stroll down the street with a swagger that is neither rushed nor slow.

The spacious feeling of the music is supported by Jorge Rossy. To some listeners, he will be familiar as the drummer in Brad Mehldau's classic trio, but he has reinvented himself as a vibraphonist and his crystalline tones add to the relaxed and dreamy atmosphere of the music.

But make no mistake, as a composer, Nørgaard isn't satisfied with stillness. His music is in movement and the poetic quality of his tunes is balanced by a cool sense of swing that keeps the pieces from meandering. He also has a knack for writing crisp and catchy lines that are shaped into melodic themes. The players in the group add different layers to the music, not least Miller, who is a subtle sound painter as well as an advanced timekeeper whose feeling for the pulse of the music fits Nørgaard's approach perfectly.

The music gently strolls along and the vocal track "Unrequited Love" is a nice variation to the instrumental tracks. Here, singer Eva-Louise Rønnevig sings that "I'll try to put this village life aside," but the feeling of the album is more of a village than a city and that is altogether a good thing.

The ending, the epic "Blue Arara," concludes the album in a beautiful way with guest guitarist Jacob Funch adding a circling melodic motif that spreads like rings in water. It is the kind of seemingly simple music that Jakob Bro has perfected. Here it is felt in Nørgaard's music. It combines many elements into a strong effort of modern autumnal swing music for city hipsters dreaming about moving to the countryside.