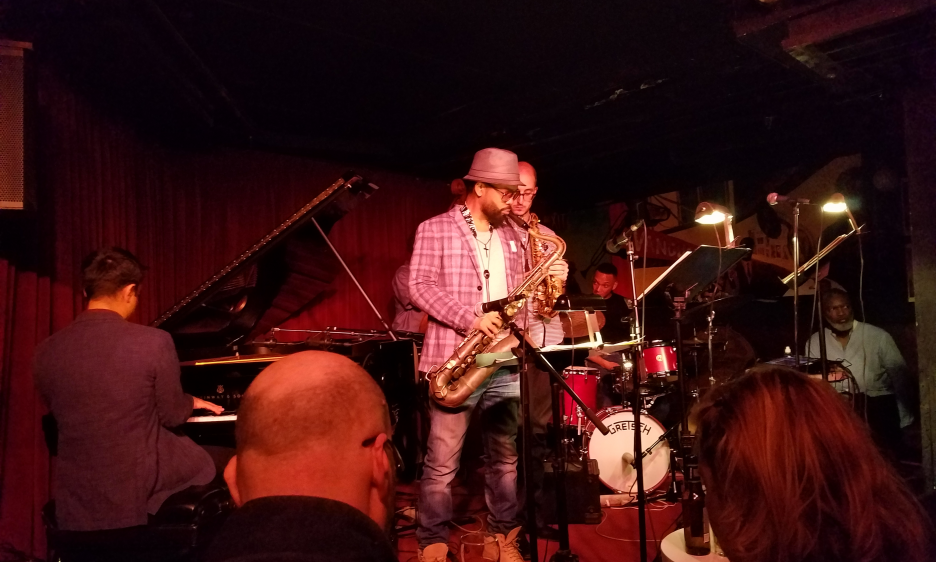 I'll recreate this blistering first set the best I can. The sextet nudged their way through the Vanguard's current crowd and its deep history. The applause built. Vijay Iyer took his place at the piano, turned to the crowd, spilled water on some mic and electric cables and hoped it doesn't cause a problem. He introduced his band, obviously straining-at-the-bit: Graham Haynes trumpet, flugelhorn, electronics; Mark Shim tenor saxophone; Steve Lehman alto saxophone; Stephan Crump bass; Jeremy Dutton drums. A whispering piano/horns intro quickly boiled over into a force of nature, as it should be. Haynes took the lead, lifted the roof, traded off to Lehman for a no-holds-barred solo. Lehman passed the flaming torch to Shim who only added gasoline to the fire. Iyer road the waves, cascading, dementing, deconstructing, finding new forms, new ways to excite. A sparring post-bop/all-bop schematic. The horns punched the air, punching into new heights. As Dutton soloed fiercely, Iyer and Crump began raging behind him. Iyer stepped to the fore, upped the ante, his solo daring, lept the whole to climax—the horns tore forward mach 10.

A spidery Iyer solo set the next work apace. Titles were unnecessary at the Vanguard that night. It was all about creation, now, pulling it from the charts, the air, from the legends before. The trio of horns swaggered high into the fray. Haynes manned up once more, cutting the air as Dutton frenzied off the rails behind him. For a good while you forgot this was Iyer's gig, and that's what great live jazz is: Each player taking a stand for the other. Pulling the stakes higher. Piano, bass, drums telling the tale of a million voices. Iyer's left hand foreboding, punching staccato; the space between chords, between voices like a collective grasp of something higher than what's outside. Shim stepped back to his mic as a jumpy quarter-time buildt behind him. Crump was absolutely amazing. Dutton powered forth towards something bigger than this stage, this room. The music now moved in blurred moments, Haynes adding layers of echo to his horn so it grabbed you from the outer reaches, from dreams, from thoughts unfinished and unfathomed. We were at fever pitch but in walks Iyer—vigorous, acrobatic, elliptical, sonorous... bass drove the next segment. Lehman searched high, soared to crescendo.

You couldn't stop it now. It's almost terrifying how high the human spirit will take its chosen voice. Stuttering. Fluttering. A reflectively dark tune emerged, triumphant despite the darkness we all knew waited to envelope. Things got funky now, earth, wind, fire. Dutton went double time, a bustle of block chords. For a moment Iyer did Hancock. Tenor and soprano barged in. Another thoroughly mesmerizing Iyer solo. Where does this guy find the time to play this way and win genius awards? Lehman picked up the pace, seeming to race the leader to the finish line. Haynes broke the surface. Shim covered the corners. Iyer pulled the whole towards a gratifying, spellbinding end. The crowd erupted. The lights come up. And Roy Haynes was in the house!