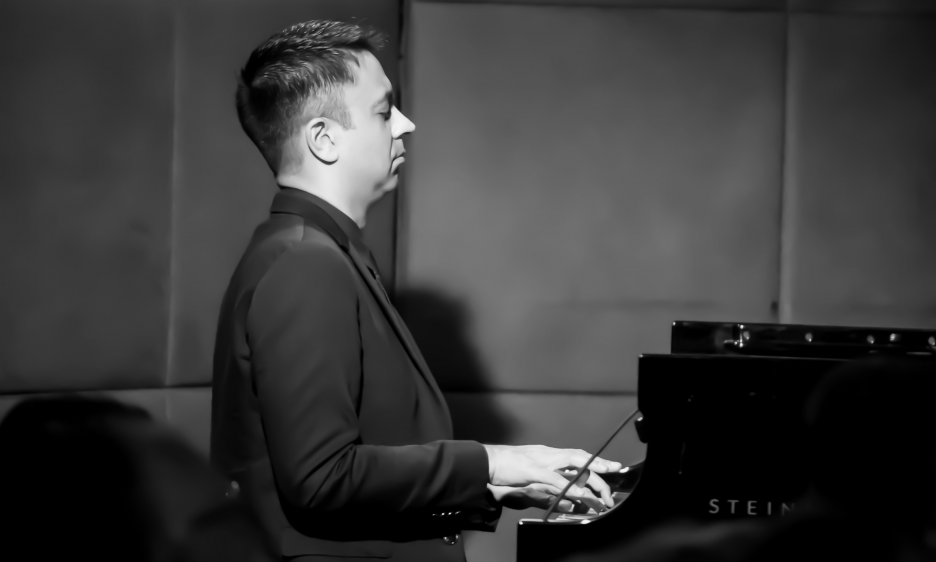 Vijay Iyer's sextet astounded the audience in their highly anticipated, sold out show at the Jazz Standard. From the moment Iyer graced the stage, the audience erupted into an earth-shattering ovation that danced into his greeting and band introductions. The sextet features Mark Shim on tenor saxophone, Nick Dunston on bass, Jeremy Dutton on drums, Steve Lehman on alto saxophone, and Graham Haynes on flugelhorn, cornet, and electronics. Just before the show began Iyer stood close to the piano with a confident smile—his gaze and composure foreshadowing the evening ahead.

The GRAMMY-nominated pianist, producer, composer, writer, and bandleader has served as the Franklin D. and Florence Rosenblatt Professor of the Arts at Harvard University since 2014. Iyer attended Yale University and received his doctorate from the University of California, Berkeley. He has also served as faculty for New York University, the School for Improvisational Music, The New School, and Manhattan School of Music. The MacArthur Fellow, Doris Duke Performing Artist Award recipient, and Herb Alpert Award winner is known for his muscular conformations, intelligible compositions, and sovereign tonality.

Iyer's show at the Jazz Standard was a precursor to the release of his critically lauded album The Transitory Poems with pianist, organist, and composer Craig Taborn. The joint venture is slated for release on March 15, 2019 on ECM Records. The record was produced by ECM founder Manfred Eicher and recorded last year in Budapest at the Liszt Ferenc Academy of Music. The album is a tribute to Iyer and Taborn's mutual inspirations Muhal Richard Abrams, Jack Whitten, Geri Allen, and Cecil Taylor. Iyer and Taborn originally united in 2002 via Roscoe Mitchell's Note Factory. Though the two have played together for more than a decade, The Transitory Poems will be their first album as a duo.

"Life Line," the first song on the record, is a concise, thought-provoking composition that displays both Iyer and Taborn's musicality and agility—scaling dramatically across the breadth of each key. "Sensorium" follows suit as a shorter, dreamlike arrangement pivoting and unfolding rapidly. The way that Taborn and Iyer bind and navigate measurement and time is impressive. "Kairos" begins romantically and shapeshifts into a more inquisitive yet exigent and ornate ensemble. "Luminous Brew," their homage to Cecil Taylor is a daringly cross-rhythmic constellation, and another highlight amongst the eight song masterpiece. Iyer and Taborn's album is a palpable voyage of unadulterated profundity and enchantment.

The Jazz Journalists Association Jazz Awards named Iyer's sextet its 2018 Jazz Band of the Year, and with such praise stems an eagerness to experience the ingenuity that defines the group's performance. There was no disappointment at the Jazz Standard: the band's delivery and tonal palette was most satiating. Iyer is an architect, purveyor, and conduit of great music. His improvisations and harmonies are lean and incandescent, but maintain a kind of alliteration that leads and complements the band's instrumentation.