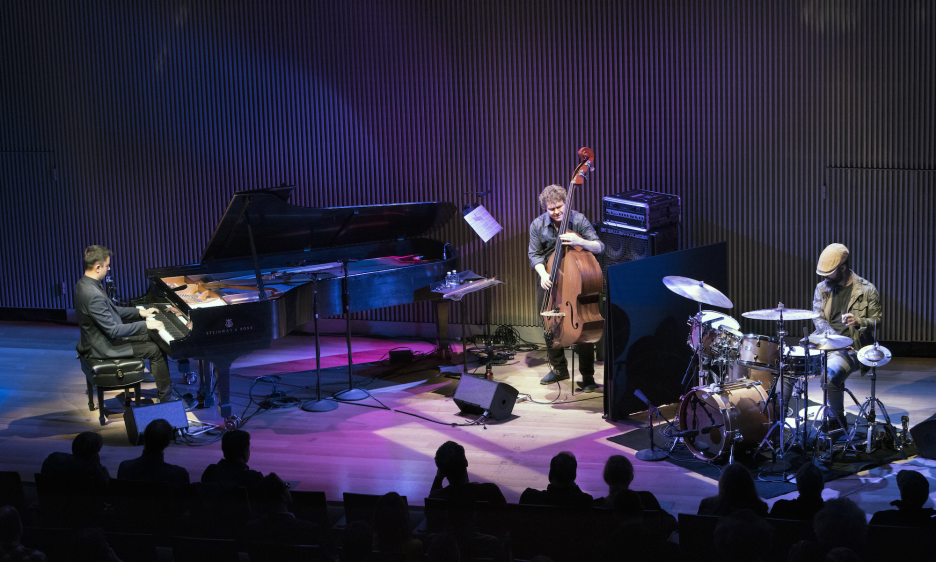 Vijay Iyer told a San Francisco audience at Herbst Theater that it is amazingly difficult to tour in the United States, by way of explaining why he did not perform in his former hometown more often. But, since, SFJAZZ opened their new building, the situation has evolved, and he has been a repeated guest at the facility.

This year Iyer was assigned four nights for which he selected four distinct formats. Thursday, the first evening, opened with him on the stage—clean cut and wearing his customary dark suit as usual—with a large photographic portrait of Geri Allen projected above the stage. . Explaining why he did not perform in his former hometown more often, Iyer explained that the entire evening was dedicated to the influential composer and pianist who died last year.

To celebrate Allen's dynamic and groundbreaking career, Iyer invited two of his favorite pianists to share the stage with him: Vancouver native Kris Davis has won kudos since her debut on the New York scene in 2001, while Craig Taborn, is an introspective pianist known for his work with saxophonist and band leader Chris Potter, the Art Ensemble Of Chicago's deceased master trumpeter Roscoe Mitchell, James Carter, and others.

On stage were two Yamaha grand pianos, sandwiched into each other. Iyer sat down at stage left while Davis sat across. They launched into the first piece as Iyer played in rapid fire pulses, while Davis added complimentary notes. Then the music slowed to a meditative pace, bringing up images of ripples in a stream. In the reflection from the piano, Iyer's hands appeared to float magically, as though disembodied.

Iyer entered a brief soliloquy as Davis "prepared" the piano with objects, making it ripe for percussive effects. Iyer played powerfully and fervently, with Davis riposting in turn. At times, it proved difficult to tell who was playing what note, as the sounds converged into a sonic whole.

Davis then began playing an electronic device, which she had on the left hand side of the keyboard, alternating it with nearby keys. Percussive playing closed the duet.

Next Taborn, clad in a blue shirt and green pants, came out and Iyer, after enthusiastically welcoming him, exited, Davis then switched to the other piano and their duet commenced. When Taborn played a short riposte, Davis countered. Taborn pranced on the keys, Davis replied with shrill tones; Taborn turned quiet, then meditative, his head bent down in concentration. In another rapid fire excursion, he let loose on the 88s.