Jabbo Ware and The Me We & Them Orchestra: Vignettes in the Spirit of Ellington 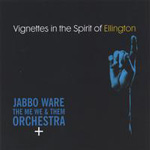 28 years into their existence, James Jabbo Ware and The Me We & Them Orchestra recorded their first live album, which has just been released. What is time to the muse that was inspired by Duke Ellington? Days, months, and years flit by, but the music stays timeless.

The ten tunes here make up the context. Ware does not need a lengthy outing to make his statement, and so they're mostly compact—except for the last selection, which gets an extended workout of over 24 minutes. But he breaks it up into sections, each a sketch that pins its own form but nevertheless forms an integral part of the whole—as are the strings and the French horns that were brought aboard for this performance.

On the first track, the yawning arc of the saxophone is countenanced by the smooth underlying lines of the French horn, a trajectory that comes up front later after the bass marimba provides a brief interlude. The lines shift constantly, the segments added through parallel movement and dialogue. The dispersal of form and a cacophonous whirl lead into "Strange Land, but even as calm descends and the strings move in, dissonance persists.

A loping line on the bass is the herald for the piano and the blues when they get "In The Spirit Of. There is no hard guessing as to whose spirit is being made manifest. Ellington's mark is here: in the arrangements, in the way the horns come in, in the whole piece of work. And for sure, the title tune is top notch!

There's more blues on "Don't Forget Who I Am, the opening fanfare followed by Hilton Ruiz's ruminations on the form, then silence broken by the interjection of Bill Lowe's bass trombone. The arrangement keeps the thematic concept evolving, the trumpets creating facile lines with just a hint of a wail, plus some wah wah and growl bringing in added stimulus. A perfect close to a fine record.

Intro #1 (In The Beginning); Strange Land; And Here we are again; Interlude; Saint Louis Train; Give Me A Moment; In The Spirit Of; Intro #2 (Free At Last); The Ultimate Force; Don