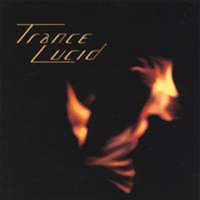 Rich, meditative instrumental music, finely crafted and heartfelt. Vigil is the second indie recording by the trio Trance Lucid, based in Oakland, California. The compositions, all by guitarist Dave Halverson, usually consist of repetitive themes that evolve subtly into new forms, rather like the music of Steve Reich but certainly not minimalist in nature. The three performers have strong ears for texture and thematic variation that keep this disc oceans removed from the usual dross of trance music and contemporary jazz.

Halverson is an extremely flexible guitarist with a wealth of fresh ideas and techniques. On most tracks he relies on an appealingly vibrant fusion tone, with nice deviations. “Baroquen” begins with a sprightly, brittle acoustic theme before the electric guitar arrives in a warm wash of delay. The guitar on “Panhandler” bears a rougher, funkier edge; “Claire” is reminiscent of Eric Johnson in a pensive mood, while “Aquarelle” leans toward the gentle melodicism of Joe Pass. All these divergences of style are well-chosen and befitting the individual tunes, not merely intended to flaunt Halverson’s noteworthy chops.

Bassist Bill Noertker and drummer Terry Lee generally remain in the background (Halverson is clearly the man in charge here), but their contributions are vital and unfailingly on the mark. Tunes like the Latin-tinged “Carousel” best illustrate the rhythm duo’s rapportive ability to listen and play creatively off each other while providing solid support for the guitar.

The end product of Trance Lucid’s musical equation is compelling, moving fusion that neither browbeats listeners with manic guitar shredding or dulls the senses like so much contemporary electric jazz. Vigil is music that one can either choose to relax by or explore with deeper concentration. And it makes for a darn fine freeway soundtrack as well!