By NIC JONES
September 8, 2006
Sign in to view read count 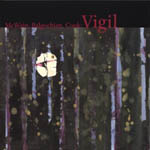 The "classic" piano trio need not result in music high in gloss and technique and low in stimulating listening, as these three players prove on Vigil. Their music comes from somewhere other than the cocktail lounge, though hazarding a guess as to where might be a little fraught, especially as, on this evidence, the trio is intent on getting as far away from that lounge as is humanly possible.

Although this is in essence a trio of equals and thus a model for some kind of democracy, Alby Balgochian's bass repeatedly catches the ear. On the likes of "The Window Of Views," he's all over the music like a man with the most vibrant lust for life, shadowing, leading and following; Andy McWain's piano playing, fluid in the sense that he has got the better of technique, responds as much to the prompts of Laurence Cook's drums as it does to Balgochian. The word "trialogue" might not have attained legitimacy yet, but it's high time it did, especially when it describes more or less precisely what's going on here.

Though this is rarefied music, there are of course historical precedents. Having said that, the looming but always welcome shadow of Cecil Taylor hardly makes its presence felt, and while the opening of "Impervious Light" comes closest to Taylor's sonic rush, the impression is quickly dispersed by the trio's move into less dense space.

Andy McWain, for all of the individuality of his contributions, doesn't go under the piano lid for greater variation in sound, and his devotion to the keyboard per se gives the music a limited, dry sonic palette. That is no problem when he works the palette as effectively as he does here, and indeed it might be argued that the resulting restriction, if indeed that's what it is, is an integral part of the music's success—especially when Balgochian coaxes unearthly bowed sounds out of his bass at the beginning of "Indestructible Red."

Part of the great appeal of this trio lies in the fact that the musicians know when not to play, something that cannot realistically be said of too many who worship at the altar of technique. That lends a further edge of distinctiveness to this disc, and it rewards repeated listening.