By GORDON MARSHALL
January 10, 2010
Sign in to view read count
On a June night in 2009, Vic Rawlings was spinning 1950s LPs at a local record store in Central Square in Cambridge, Massachusetts. At his side, the "sound fountain"—a true period piece of a hi-fi tower (mono, of course). Buddy Holly started the party, segueing into Doris Day and The Ink Spots. Sometimes the records skipped and hissed. The extraneous noise put a smile on the evening DJ's face.

"'40s, '50s, '60s—the fountain's good until about '65," Rawlings explains. "[The speaker] was made by Bell Labs in the '50s. I love it. It makes those records sound right. An owner-operator stereo store dude hipped me to the history of mono/stereo and the evolution of playback equipment. It's a lot to take in. I'm convinced there is a benefit to listening to recordings on the playback equipment of their day...but that's another interview!" 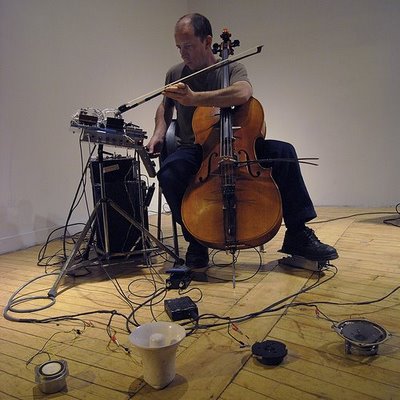 On another night, just down the street at the local YMCA, Rawlings played guitar hero (in the old school sense—not the game!) in post-jazz transgression partner Dave Gross' band, Moshi Moshi I Am The Decider, whipping out licks from The Rolling Stones' "Nasty Habits" as Gross stomped on a Casio keyboard and Gross' wife Polly Hanson shouted from her drum kit. Mike Bullock sang garbled French and the fifth Moshi, Angela Sawyer—owner of the aforementioned record store (Weirdo)—belted out shrill pitches like the latter-day, outside Janis Joplin she is. Rawlings, relishing every moment of adopting the talented, macho- guy persona, flew in the face of those two personal anathemas.

Rawlings loves music—any kind of music—but when pressed, he might demur. "The stuff I have come to hate at times is the stuff I've been forced to listen to in the public world—the wallpaper drone of Billy Joel, Elton John, The Beatles..." Then again, he recapitulates: "It's important to make peace with that, too." What he loves best, or at least creates best, he resists calling music, or art, at all. His chosen modus operandi is small format electro-acoustic improvisation with an amplified cello and an instrument of his own invention—a series of open-circuit electronic devices—on which he etches out a most demanding and unrelenting discipline upon the ears of the audience. Teaming up with percussionists who grate toms with violin bows, a bassist who uses rubber balls, a balloon player—"some of which are very large, like a big, big exercise ball," he says—Rawlings questions the very function of hearing. He questions how we produce sounds and if sound itself is even the central question when it comes to invention in instrumental ensembles.

"The cello and electronics are fundamentally different instruments," he emphasizes. "There is no electrical contact between them—only acoustic. At times the cello pickup 'hears' the electronics in the room. The cello is absolutely unprocessed except for the equalizer on the preamp, which kills unwanted feedback, and the Electro-Harmonix Memory Man analog delay, which is most often used to capture sounds in the room to make drones. I use Memory Man to fatten up the sound a little, but when an echoey sound happens, it's often a mistake."

In other contexts, Rawlings plays—and teaches—traditional, old-time banjo. "Some people might think I'm deconstructing that, too, but I'm not...yet," he assures us. Then he tells a joke. "How long's it take to tune a banjo?" [long pause] "How long you got?" he quips. In his experimental work (and it is experimental, truly, in the sense of involving the aleatory), he constructs an entire ethic out of this. As he modulates the broken guitar pedals and the damaged circuit boards on his table, he is forever fine-tuning and rough-tuning his larger sound pantomime. He allows chance blips and buzzes to surprise him and spur him to alter the collective patterns and counterpoints that arise out of the mayhem. It can be downright jarring, like a smoke detector in the middle of the night, or as peaceful and reassuring as the hum of an electric fan. As often as not, the noise is homeopathic, almost unnerving at first, but cathartic in the long run—like primal scream therapy.

Rawlings' instrument is ever-changing, as he finds new devices to add and subtract, including a timer. "The timer's been there since around 2000," he says. "I had thought of using one, but it seemed like cheating. Then I played a show with my friend Sean Meehan, and he used one, and it seemed like such an obvious thing. I went out and got one and have used it ever since. If I forget it I do just fine, but it is a help in constructing a piece."

The cello has been his instrumental constant, although its function has changed over the years. He used the cello earlier in his career more traditionally (if that's the word). More recently, he has relegated the cello's role to that of a sounding board. These days he often will eke out the most minimal plucks and bows from the instrument and then shift back to his table of circuitry.

It should be noted that Rawlings rebuilt and designed the instrument entirely himself out of a basic plywood model. He added twelve sympathetic strings (although one of them broke) beneath the standard four, to give it an Indian sitar feel, and many other niceties and nuances, also of his invention, can be admired within and without upon close inspection. In his mid-1990s band Mile Wide, he started with a carved model but, he says, "the feedback was too quick, the overall mechanism too delicate."

"I used to play more notes on the strings; occasionally I still do, when the music merits it. As so many others were in Boston, I was somewhat under the spell of [saxophonist and clarinetist] Joe Maneri and by extension, John Lockwood—the guy who often played outrageously great bass with him. Also, Randy Peterson was an influence—he was the drummer. He had a great ability to lengthen a phrase and to suspend time," Rawlings says. "Phrasing/pitch/harmony/timbre—in that order—were a big thing for many players back then. That was cool, but then it was something to move beyond."

"Back then I usually tuned to standard cello tuning, CGDA, detuned to make the strings loose (as low as A), but always purposefully a little bit out of tune so there wouldn't be a perfectly in-tune sound if two open strings rang out together," he continues. "Perfect intervals were too strong, bold, old-world sounding to be too present in our music as it evolved. Now the tuning of my cello strings is always to the room or whatever else is making sound. It's a bit intuitive and a bit scientific. The design—the sympathetic strings running under the fingerboard—is taken from instruments in a museum in Vienna, but not the pitches."

Likewise, his usage of circuitry has changed. A student of his (and yes, you must be a student) can trace this evolution through his eight or nine albums. In 2003, Rawlings recorded two discs, joining percussionist Tatsuya Nakatani and bass-balloon kit player Ricardo Arias to form N.R.A. (an acronym for the musician's names). Rawlings has a wry sense of humor, though. He is a pleasant and witty gentleman with a dead-serious, bitter acerbic core. In other words, the band's name could as well be biting political satire. The music from this time was likewise heavy-duty, no-frills disciplined abrasion. It rested somewhere between the Musica Elettronica Viva and The Taj Mahal Travellers, though not as academic as the former or as trippy as the latter. All told, the political label sticks, as the work gives off the impression of enlightenment through aggression or, to be sure, aggression through enlightenment.

Mawja is an ensemble—ongoing but currently on hiatus (for geographical reasons)—with bassist Mike Bullock and Lebanese trumpeter Mazen Kerbaj. The group recorded two CDs, Studio One and Live One (both released Al Maslakh, 2007). To these ears these definitely have that trippier, TMT feel—an eclectic "world" feel (if the term can be drained of its suggestion of bland bathos) with drones and long, oceanic passages that seem a call for peace and global unity. Still, a percussion instrument rattles here and there like a spun revolver chamber; elsewhere, one hears what sounds like a foghorn. At the end of Studio One, there's a dystopian bucolic soundscape that suggests to me, in a kind of warped impressionist take, flies buzzing around swine.

That said, Rawlings insists, "There was certainly no conscious going for any certain idea other than trying to play and make it sound good. I have only done thematic/interpretive music a few times and usually don't like it." He allows, however, that "devastation and beauty share the same forms and modes; both include calm and activity....My notion is that 'harsh noise' is a silly idea. If it's good harsh noise, it becomes beautiful; the harshness is when it's done poorly. The macho appropriation of noise is a funny thing. It's really not so macho." But what about mimesis? Again, he's not so sure. "We were listening to Mazen's stories of gunfights and rocket attacks—violence and weariness," he says.

In addition, Rawlings has recorded two duets with Bullock, On That Which is Best and the Best That Can be Done Under the Circumstances (Fargone, 2006) and Fall of Song (Chloe, 2003). He's also recorded a duet with percussionist Tim Feeney, In Six Parts (Sedimental, 2007), and a sort of isotopic string trio (with an added guitar), Refrain (Creative Sources, 2008), with Gust Burns on piano, Ernesto Rodrigues on viola and David Hirvonen on electric guitar. At this point, he has honed his contrarian art to a minimal complex of acupuncture pinpoints. The string trio still has its grand sonorities as a whole, but one senses them sliding out in the evolutionary scale. This is apparent on the duo with Feeney—especially when one hears him live and solo. Hearing him can be compared to freefalling, which may give an idea of the sort of challenge and exhilaration one might experience when one bears with him, not knowing where one's feet are going to fall.

Jazz is a guessing game. With syncopation, it has always been such with trying to anticipate the next beat. The idiosyncratic Thelonious Monk took this to another level, which contemporary artists like Anthony Braxton have revisited and resituated in turn. But that is like comparing a tall ship to a submarine. The listener, once caught up in Rawlings' art, is taken undersea not knowing when he can catch a breath. This arbiter of sonic chance and opportunity blesses us with a mad and illuminating adventure. He continues to do so, as anyone who witnessed his magical, mysterious Boston duo with Ikue Mori in the spring of 2008 will testify. His acupuncture down pat, Rawlings could vary its healing and invigorating properties. His eclectic amplified instrument complex gave an earthy counterbalance to Mori's roping, ringing laptop improvisations.