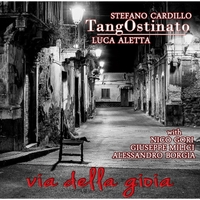 Tangostinato is a music project with a one-of-a-kind approach to their sound and feel. Their most recent release, Via Della Gioia, stands out as a really stunning example of their workflow and creative vision. The opening track, "Oblivion," has a moody, atmospheric sound, creating a consistent build-up of beautiful textures as the different instruments' sounds keep growing around the arrangement. "Libertango" is yet another highlight, with a different approach to the genre. The drums, in particular, give the song a pleasant modern fusion vibe, which creates a striking contrast with the timeless textures of the piano and the beautiful arpeggios. The title track itself is a twist of lovely melodies, highlighting the group's love of experimental ideas and elegant jazz aesthetics. There is a certain tangible quality to this release, which sets the bar higher in terms of songwriting and performance. "Araucanos" has some pleasant world-music influences, especially coming through in the percussion elements, which create a stunning underlying texture. The instrumental diversity in this song is truly amazing,

Fans of artists as diverse as Astor Piazzolla, Miles Davis, Thelonius Monk, and Kaoru Abe would definitely enjoy the eclectic feel of this release. What is striking about Via Della Gioia is definitely the fact that the musicians in Tangostinato managed to portray a fantastic modern picture of a combination of timeless music styles and ideas. The dynamic range on the record is also spectacular. There are many intimate solo moments, in which a single instrument creates a texture as softly as possible. Oftentimes, these solitary themes are resurrected with other instruments blending in and bringing an intense weight to the mix. There is much going on here, although the aesthetics of this record remain incredibly understated. Even though there are so many instruments and different genres creeping in, the strength of this album remains is its down-to-earth immediacy. The songs are arranged tastefully, and the LP has a charming old-fashioned sound, which almost feels like listening to old vinyl from the golden age of 12" records. This kind of music always works better with this particular tone, and it is always amazing to see artists taking their sound towards this direction.