By MARK SULLIVAN
November 22, 2017
Sign in to view read count 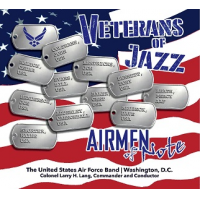 Many famous U.S. jazz musicians served in the armed forces. This ingenious Airmen of Note project celebrates them by presenting a program of music composed by (or associated with) several of those musical veterans. Even a cursory look at the track list shows that taking the repertoire solely from military veterans is no limitation. Original compositions include Cedar Walton's "Ojos de Rojo," Percy Heath's "One Bass Hit," Wayne Shorter's "Footprints," Bill Evans' "Very Early," Joe Henderson's "A Shade of Jade," and Dave Brubeck's "In Your Own Sweet Way."

Using tunes associated with artists allows for the inclusion of Great American Songbook standards, further broadening the stylistic range. So Tony Bennett is saluted with Irving Berlin's "Cheek to Cheek," Cannonball Adderley with Rodgers and Hammerstein's "Happy Talk," John Coltrane with "The Night Has a Thousand Eyes," and Chet Baker with "The Thrill is Gone" (the standard, not the B.B. King hit of the same name). "Cloudburst" is a special case: dedicatee Jon Hendricks wrote only the lyrics, but it's strongly associated with him, especially the famous Lambert, Hendricks & Ross recording.

It's surprising that Adderley and Coltrane are not represented by original compositions, since that is what both saxophonists are best known for; and Coltrane's iconic standard performance would have to be Rodgers and Hammerstein's "My Favorite Things." But if some of the choices seem a bit of a stretch, there's no denying the energetic, utterly convincing arranging and playing throughout. Vocalist Paige Wroble is a particular standout, and I suspect some of the song choices were made primarily to feature her. She's pitch-perfect: never overdramatizes, and can even scat (which is also not overdone).

The entire big band's playing is sharp as a tack. And most of the arrangements come from the pens of band members, as well. The trombone section is especially well represented, with two each from Ben Patterson and Jeff Martin. A fine example of this sterling ensemble's work.

Ojos de Rojo; One Bass Hit; Cheek to Cheek; Footprints; Happy Talk; The Night Has a Thousand Eyes; The Thrill is Gone; Very Early; A Shade of Jade; Cloudburst; In Your Own Sweet Way.