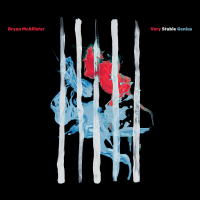 In case you haven't been reminded within the last five minutes, Donald Trump is the president of the United States of America. Also, on the inconceivable chance that he has not tweeted or otherwise been at the center of news coverage lately, he is known to misspell words, utter non-truths, and generally polarize the political landscape with his divisive, often inflammatory rhetoric. Many find this situation distasteful, to say the least. While keyboardist/composer Bryan McAllister may also feel the same way, he has used the situation as fodder for a cathartic musical response. On his debut album, McAllister "draws on his passion for social justice and examines our current American cultural landscape through sardonic compositions inspired by the bizarre statements and actions of the man elected to the presidency."

Each composition on the record is named after either a presidential gaffe, such as "I Know Words" after the now infamous quote by then-candidate Trump, or after a topical subject like the short but poignant "Mueller." Together, the titles paint a picture of some of the most absurd moments of the Trump presidency while highlighting some of this administration's concerning tendencies, such as rebranding unproductive time as "Executive Time" or the president's tendency to label much of the criticism directed him as "Fake News."

However Very Stable Genius doesn't rest on its ideological laurels. The album is founded on rock solid playing and swells between emotional and compelling highs and lows. If there are hints of Kneebody, that's no surprise; McAllister completed graduate school at the University of Nevada, where Kneebody keyboardist Adam Benjamin teaches. Though the bands have similar instrumentation, McAllister's writing is unique and draws on his formal training in jazz as well as his experience playing indie rock. Tracks like "Executive Time" (featuring a beautiful electric bass solo by Zack Teran) and "State Of The Uniom" are introspective, with lyrical melodies that would be equally at home on an NPR Tiny Desk concert or on stage at a jazz festival. The fact that these melodic tracks coexist so well with upbeat compositions like "Mueller" and "Plan A Parade" is a testament to McAllister's writing and his band's phenomenal playing.

Alto saxophonist Levi Saelua's clear and expressive tone serves the melodies well, as does his technical yet emotive improvising. Similarly, trumpeter Brandon Sherman, at times recalls Shane Endsley's exploratory approach and inspires drummer Miguel Jimenez-Cruz to push the songs into new and exciting territory. For his part, McAllister steers the ship from his seat, stepping out to play beautiful introductions and solos that run the gamut from fierce to devastatingly thoughtful.

This album is a fiery, satisfying musical rebuttal to current cultural animosity. If politicians could be so direct, maybe we'd have fewer self-proclaimed "very stable" geniuses running the show.

My Fingers Are Long And Beautiful
Executive Time
Fake News
I Know Words
My IQ Is One Of The Highest (Sorry, Losers And Haters)
State Of The Uniom
Mueller
Plan A Parade