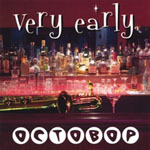 Why can't they make albums like this anymore? A few words that might best describe this project could be: West Coast Jazz both joyous and swinging. The group's leader, reedman Geoff Roach, puts the Octobop musical mission in total perspective. Roach has always been enamored of the mid-sized West Coast bands of Shorty Rogers, Marty Paich and Dave Pell, as well as the piano-less ensembles of artists like Gerry Mulligan. Roach has assembled a group of eight musicians who are fully capable of ensemble as well as solo playing. In seeking to improve the group's communication with the public, as well as bringing back the West Coast sound, Roach utilizes both the original arrangements of Rogers, Paich and others, as well as charts by his own personnel; sometimes both within the same composition.

The results of Roach's planning are truly unique and certainly West Coast jazz fans can once again hear the music that leapt from every doorway several decades ago. Johnny Mandel's "Keester Parade" is a perfect example. With a new arrangement by guitarist Jack Conway, this tuneful melody is given the same treatment that Cy Touff provided some fifty years ago, and now features a spirited solo battle between trombonist Jim Schermer's and muted trumpeter Randy Smith. Gerry Mulligan's signatory "A Ballad" is played appropriately by Roach's baritone sax while he and Schermer take solo space as the composition remains both nostalgic and updated by Roach's arrangement.

The title tune is the same one written and recorded first by Bill Evans, with another effective arrangement from Conway, featuring tenor saxophonist Matt Kesner and vibraphonist Bill Hazzard, who also contributes several other sterling solos throughout.

The list of highlights goes on and on. Roach's baritone is featured on the film score version of Mel Tormé's "Born to be Blue." Shorty Rogers' "Powder Puff" takes the up-tempo tune with a Roach arrangement and features Smith, along with the baritone saxophonist. The inclusion of "Do You Know What It Means to Miss New Orleans" is strictly a personal touch from Roach, who not only hails from the Crescent City, but wants to remind the public of the hardships there over the past few years. The album is bookended by two Paich arrangements of "Love Me or Leave Me" and "You're My Everything," both taken up-tempo

Octobop's fourth album, Very Early, is a terrific combination of West Coast jazz nostalgia and high level ensemble performance, in addition to the showmanship of the solo work of these eight musicians. It is a masterful mix of innovation and musical diversity.