Dollison and Marsh: Vertical Voices: The Music of Maria Schneider 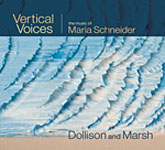 Maria Schneider's orchestral music has been described as evocative, majestic, magical, heart-stoppingly gorgeous and beyond categorization. Therefore, it was with trepidation that vocalists Julia Dollison and Kerry Marsh approached Schneider with the concept of using their voices, with the aid of multi-tracking studio techniques, to create the sound of her orchestra. They would wordlessly sing the brass and woodwind parts in her complex orchestrations.

At first, Schneider says she thought they were insane, but, after listening to a portion of their rendition of her "Journey Home," she enthusiastically signed on. She even volunteered her rhythm section: Thus was born Vertical Voices: The Music of Maria Schneider.

Dollison and husband Marsh currently teach, conduct and perform together. In 2000, Dollison won Downbeat's Best Jazz Vocal Soloist. Her relationship with Schneider began 10 years ago when she performed wordlessly with the Schneider Orchestra on "Journey Home" and "Hang Gliding"; both compositions adapted for this new CD. Similarly, Marsh has worked closely with Schneider, studying composition and arranging techniques. In 2003, he earned the Downbeat Student Music Award for best collegiate jazz arrangement.

The duo's style can be traced to the Hi-Lo's in the fifties, and their voice blend is akin to contemporaries the New York Voices. In this recording, the complicated layering of voices is flawless and beautiful. Their sound completely captures Schneider's arrangements. A caution, though: it is best to listen to only a few selections at a time. Listening to the CD in one sitting becomes too much of a good thing. In each track there is an inherent sameness of sound.

Comparing the orchestra recordings with the duos is interesting. On "The 'Pretty' Road," the rhythm section opening on both is virtually the same. What is more, Schneider's original features a female vocalization on top of the orchestration at the beginning. Here, Dollison's voice beautifully becomes the trumpets.

The standout track on this is "Sky Blue." Starting out, the two create a somber horn section before Dollison alone takes on the higher instruments. She builds to a powerful climactic moment. For her, a vocal tour de force.