By GLENN ASTARITA
January 11, 2015
Sign in to view read count 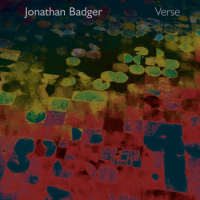 Baltimore, MD, native Jonathan Badger is a guitarist and technologist who aurally paints a sequence of montages with hornists, vocalists, and strings performers, including Shodekeh who is listed as utilizing a human beat box. It's a diverse electro-acoustic brew via an off the wall melding of avant-garde expressionism, ambient electronica and progressive rock amid slight inferences to Frank Zappa's unorthodox time signatures and a host of polytonal attributes, partly devised by Badger's keys and computer processes.

Badger's line of attack rings like a score for an imaginary movie. With a hodgepodge of quirky deviations and subtle intricacies, he tosses a few curveballs into the mix, while conveying a keen imagination along the way. On pieces such as "The Bear" and "Nimbus," his various percussion grooves, electronics effects, acoustic guitar and banjo work transmit a bizarre take on Americana with orchestral synth overlays, cyclical chord voicings and a few nods to 70s Canterbury prog rock. He also incorporates background vocals by the Sisters Wick who pose yet another dimension to Badger's twisting plots and surreal soundscapes.

"Limbec" features horns choruses atop a vast plane of electronics-induced patterns in concert with Badger's lightly strummed guitar parts, spawning uncanny musings and a disparate realm of crafty propositions. In other movements, he turns up his electric guitar, proceeding on a path of destruction with a zillion tiny contrasts and fragmented mini-motifs. And on "Erbarmen," his minimalist piano intro signals comparisons to ambient pioneer Harold Budd. However, he opens it up with tapping percussion grooves, scratchy effects and melodic piano cadenzas, summoning a fuzzy dreamscape. Nonetheless, Badger is not lacking ideas with these curiously interesting pastiches of phantasmagoric events and oscillating theme-building activities. One could only imagine what his next rite of passage will be.

St. Lucy’s Day; Dotter; It came down from the night and stood on the porch until I invited it in for tea; The Bear; Nimbus; The Valley Of the Shadow; Limbec; Bouge; Erbarmen; Sickle’s Compass Come.