By EYAL HAREUVENI
October 14, 2014
Sign in to view read count 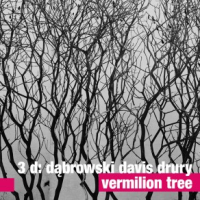 The international 3D trio was initiated by Polish, Denmark-based rising trumpeter Tomasz Dabrowski during his 2012 visit to New York that already yielded a duo with drummer Tyshawn Sorey (Steps, For Tune, 2013). Canadian, New York-based pianist Kris Davis and American drummer (with Nordic roots) Andrew Drury join Dąbrowski in a set of eight concise, snapshot-like duo and trio improvisations that blur the distinction with written compositions. The five longer compositions penned by Dąbrowski (plus one by Drury), all emphasize Dąbrowski's beautiful sound.

Dąbrowski's aesthetics are praised in the liner notes by saxophonist Lotte Anker, trumpeters Axel Dorner and the Americans Ralph Alessi and Nate Wooley. All emphasize his personal voice "that is an extension, not a recreation of a tradition." Davis and Drury, no doubt, share a similar spirit. All three are informed by the past but aim for the future, open to experiment and search with forms, atmosphere, rhythm and sounds. Still, the adventurous spirit of search and discovery is channeled with an impressive focus and imagination to music making, through supportive and playful interplay that is often articulated in contemplative and lyrical motifs.

Drury's powerful composition "Modules" pushes the envelope further. It alternates between an intense and conflictual opening that challenges Dąbrowski to follow dense, rhythmic clusters of sounds produced by Davis and Drury, and a sudden turn to a subtle, almost silent meditation on sounds, embracing gentle and weird ones alike. Dąbrowski's "Mattock Phrasemonger" is a moving, melancholic piece that highlights his poetic, emotional power and the spare manner that Davis and Drury outline Dąbrowski's flights. His "Ruddy Rudi" sketches a more experimental and dramatic exploration of a search after a form and "Apricot, apricot" is one of the few pieces that has a linear narrative.

Highly impressive. Another testimony to the unique and original voice of Dąbrowski.