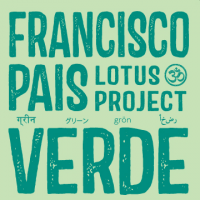 Despite this album's title, it's not a monochromatic musical affair. In fact, it's one of the most kaleidoscopic offerings to touchdown in 2016.

Guitarist Francisco Pais pulls together a collection of New York's finest young-ish guns to breathe life into his variegated works—pieces that alternately touch on everything from indie rock to modern jazz, country to tempered fusion, and American blues ideals to the sounds of drum 'n' bass. You simply never know what you're going to get from track to track and minute to minute. That's evident right off the bat when a Led Zeppelin-esque gateway leads toward group cohesion, the band shifts into intense odd-metered music topped with intricate and angular unison lines for guitar and saxophone, and the windows open onto an entrancing vista that spotlights the leader ("Drake-ish"). All of that unfolds during the first three minutes of the album opener, but the listener is never left with the sense that Pais is trying to compress too many ideas into a small space; every adjustment and change, large or small, feels completely natural here and throughout.

It becomes both easier and harder to identify the real Francisco Pais as each song reveals itself. There are certainly signature elements in his work, but he likes to toy with them, continually bending across the axis of sound and style. Pais travels down country roads and delivers hints of Appalachian folk music ("Lookit"), traffics in evolving acoustic purity and Andalusian breezes ("Devotion"), puts his guitar up against saxophone on a dark and bluesy bender ("Going South"), and places his own Wayne Coyne-ish vocals atop rocking constructs ("Sunset Full Of Moons"). By traveling these many and varied roads, and many others not cited here, he successfully makes the case that identity isn't built around a single sound or notion.

The crew of longtime friends and colleagues that form the Lotus Project—saxophonists Godwin Louis and Myron Walden, pianist Julian Shore, bassist Connor Schultze, and drummer Ferenc Nemeth—bring a perfect blend of precision, punch, and personality to the fore during these works. Louis and Walden know how to blend with the leader, stand apart from the crowd, and balance their voices against each other; Nemeth is a marvel of dynamic control and contrast, providing everything from refined and sensitive support to pile driver grooves; Schultze brings the right mix of stout anchoring and buoyancy through his bass; and Shore adds glimmer and glaze to these tracks.

In bringing this band together to flesh out this music, Pais has managed to create something completely in line with today's borderless musical world. Others guitarist-composers may be green with envy after encountering the wonderful music on Verde.