By MARK SULLIVAN
February 5, 2019
Sign in to view read count 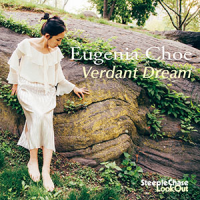 Pianist/composer Eugenia Choe is based in New York, but took a circuitous route to get there. Born in South Korea, she spent years in Los Angeles, Atlanta and Chicago (where she majored in mathematics and classical piano performance at the University of Illinois Urbana-Champaign). In New York, Eugenia graduated with a Bachelor of Fine Arts from the renowned New School for Jazz and earned a master's degree in jazz piano at SUNY Purchase.

Her recorded debut Magic Light (Steeplechase Productions, 2016) was a trio with bassist Danny Weller and drummer Alex Wyatt, who return here. That album emphasized her originals, with two covers from Billy Strayhorn and Benny Carter. This one ups the ante by including only one cover—the Miles Davis/Bill Evans standard "Blue In Green"—a piece that fits in closely with Choe's impressionistic originals. (Evans must surely be one of her influences, as he has been for most pianists who followed him.)

The title tune opens the set, demonstrating the strengths of the trio. Choe's composition is sprightly and melodic, with a free-feeling and enough form to establish a foundation. Weller's arco playing during the main theme expands the group texture, and he also contributes a fine pizzicato solo. Wyatt's drumming is light yet propulsive: swinging and elegant.

"Sunday Fatigue" confounds expectations with a head that moves between piano and bass counterpoint, and an insistent rhythmic figure. After a rhythmic ostinato that builds to a brief unaccompanied piano segment, the opening theme does not return, and the piece closes with a brief coda. The evocation of birds in "Odd Birds" finally includes some actual bird song, along with a sparse, exploratory conversation among the trio. The most free sounding playing on the album—although it is hard to tell if it is more improvisational than the rest—it is broken by the return of a regular rockish groove.

"Midnight Mingle" goes into bebop territory with its fleet theme, then gives considerable space to the rhythm section (including a drum solo accompanied by an ostinato pattern from the rest of the band). "Blue In Green"'s theme is voiced by piano and arco bass, quickly incorporating a new counter melody; the drums sit out for the entire track, making it the quiet center of the program. "Wind Catcher" concludes the album with a folksong-like Americana flavor.

Choe's debut album was impressive, and her sophomore effort demonstrates further growth. This is a significant piano trio, with a refined, original collective sound. Verdant Dream is a lovely album, full of varied compositions and excellent playing.