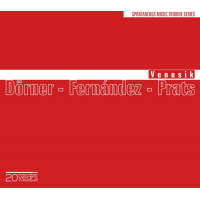 The command must have been "make it new," and the trio of Axel Dorner (trumpet & electronics), Agusti Fernandez (piano), and Ramon Prats (drums & percussion) wholeheartedly agreed. Venusik is one of several recordings made under the Spontaneous Music Tribune Series for the parent label Multikulti Project.

The newness focuses on original music and, maybe better yet, original sounds. With this trio, "original" is interpreted to mean unpredictable. Dörner's trumpet plus electronics are often mistaken for a machine language or wind drafts. Fernández prefers to act as a mechanic, working diligently under the hood of his piano as opposed to sitting at the keyboards. Prats' percussion approach offers an overwrought busyness that would be at home in an ant hill or bee nest.

The music is, by its charge, free improvisation but not free of patterns and outlines. Sounds, though, are encrypted and, without a close listen, unavailable to the ear. "AEM" pulverizes metallic objects as if titrating sound. You may initially believe this is a field recording at some factory instead of a performance by piano, trumpet, and drums. The musicians ask you to unleash your imagination. With "SSO," instruments are recognizable as trumpet, piano and drums. It's just that they are caught in the turbulence of a river's rapids, a sort of speed freak's free jazz. Deeper into the session "SRON" and "SUPARCO" decelerate the music-making to allow an insight into their process. Deconstruct becomes a construct of creation and traditional instruments become machines.