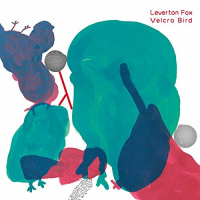 Leverton Fox was formed in 2007 when trumpeter/electronicist Alex Bonney, drummer/electronicist Tim Giles and guitarist/electronicist Matt Groom came together. That trio released Country Dances (Gravid Hands, 2009) but by the release of The Human Arm (Not Applicable, 2012) Groom had been replaced by Sam Britton on electronics. The line-up has remained stable ever since, through the release of Smart Casual (Not Applicable, 2013) and now this fourth album, with the only complication being Britton's use of pseudonyms. Here he is credited as Isambard Khroustaliov, whose birth name is given as Helmut Zeit. Odd as that is, there can be no doubt that it is Britton playing electronics here.

Although Bonney and Giles both have considerable experience of jazz and improv and are members of London's Loop Collective, on Velcro Bird all three players are featured on electronics and at times the resulting soundscape is exclusively electronic. So, rather than owing a debt to jazz, this music is far more in the tradition of Daphne Oram, Delia Derbyshire and other BBC Radiophonic Workshop pioneers of electronic music. That is particularly true of the two brief matching tracks, "Annika" and "Rice," which open and close the album like bookends.

The album's nine tracks, totalling fifty-three minutes, are consistent with the group's past work but the three players sound more integrated than before and their music more coherent. Bonney's cornet is treated to sound more electronic than before, so feels like a natural part of the ensemble sound, not bolted-on. Giles' drums are the only instrumental sounds that are unmistakably not electronic and are vital in propelling the music along naturally in a way that never sounds remotely robotic.

Across the album there is great variety in the dynamic levels and tempos of the tracks so that it never gets into a rut and keeps throwing up fresh surprises. At its most dynamic, as on "Salon Selecta" (see YouTube clip, below) the music has a compelling momentum that makes it great driving music, Kraftwerk for the new millennium. In contrast, the extended three-part suite "Racoon Coat" relies less on power, being more spacious, subtle and nuanced.

In the past, Leverton Fox have been compared to an astonishing variety of other groups. Velcro Bird demonstrates that such comparisons serve no purpose, as this trio sets its own rules.