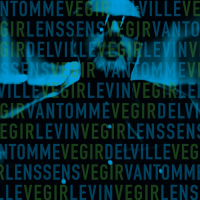 Belgian keyboardist/composer/producer Dominique Vantomme leads a razor-sharp quartet through a spontaneous treatment of a set of musical sketches. He is joined by guitarist Michel Delville, a fellow Belgian known for progressive projects such as The Wrong Object and Machine Mass; legendary electric bassist/Chapman Stick player Tony Levin (Peter Gabriel, King Crimson, Stick Men); and Belgian drummer Maxime Lenssens. The opener, "Double Down," stakes out a broad stylistic territory. A rhythmic vamp on Fender Rhodes is joined by atmospheric Mellotron strings. As bass and drums settle into a regular rhythm, distorted guitar calls get laid on top. Then Vantomme's Rhodes solo takes us into the land of electronic fusion, reminiscent of Herbie Hancock's Mwandishi septet.

"Equal Minds" covers even more ground. A theme doubled by guitar and Rhodes leads into a classic fusion Mini Moog solo, which then dissolves into a rubato electronic-soundscape. A heavy rock feel emerges from that, before going into psychedelic atmospherics. "Sizzurp" also has several mood shifts, but it is dominated by a totally uninhibited guitar solo, a noisy monster that constantly sounds like it's about to completely break up. "Playing Chess With Barney Rubble" makes space for some lovely acoustic piano, before going electronic again with electric piano and electric guitar solos.

"The Self Licking Ice-cream Cone" (the longest track) has the most conventional-sounding jazz chord-changes. The leader takes an extended Fender Rhodes solo over them, incorporating increasing amounts of electronic modification—after a pause, the guitar takes a turn. "Agent Orange" begins with an exploratory Chapman Stick solo: then Levin introduces a hypnotic Middle Eastern groove, a familiar place in his music, but an unexpected (and welcome) change here. "Emmetropia" is notable for its very slow rhythmic build. Typical of the entire session, it is a seamless blend of wild abandon and careful balance. Vegir is a special treat for Fender Rhodes fans, and takes its place alongside 2017 all-star sessions The Stone House (Wingfield/Reuter/Stavi/Sirkis) and Lighthouse (Wingfield/Reuter/Sirkis), both on MoonJune.