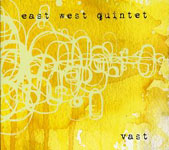 Enthusiastic youth coupled with solid musicianship and strong compositions offer the winning edge by this Brooklyn, New York-based ensemble that started in 2003 as a bop unit inspired by Cannonball Adderley. Time marches on and now this quintet delves into that opaque line that teeters between jazz-rock and jazz-fusion. Recorded to two-inch tape, the band projects a massive wall of sound, especially during the driving and rhythmically forceful pieces. It's a judicious representation of the artists' distinct stylizations that casts a cohesive, group-centric sound.

The unit renders a string of polytonal contrasts amid Cassedy's edgy electric piano voicings and atop up-tempo slash and burn workouts. However, these compositions sustain interest, and it's not all about technical gymnastics. These young instrumentalists convey savvy beyond their years, a factor that underscores this entire program. Moreover, they lower the pitch during the extended piece and finale, "Brooklyn," via moody passages and brief sojourns into the free zone.

Where others of this ilk might simply grandstand via excessive riffing and forgettable pieces, this lot merges disparate structural and improvisational elements into an all-embracing methodology. Vast is an unanticipated musical treat for 2009.