By GREG CAMPHIRE
October 2, 2010
Sign in to view read count 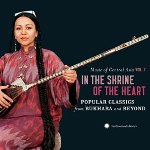 The three 2010 CD/DVD releases covered here are just a taste of a stunning and comprehensive nine-volume Music of Central Asia set from Smithsonian Folkways that spans various musical traditions and innovations from a vast, overlapping region including Afghanistan, Kazakhstan, Kyrgyzstan, Tajikistan, Turkmenistan, Uzbekistan and more. Each volume contains a CD, DVD and 40-plus-page booklet, with a wealth of information that details the history, native instruments and aesthetic principles of each ethnic group's music. The series would be overwhelming if it weren't so fascinating, as it encompasses a vast artistic landscape rooted in the deep history of the Silk Road.

Volume 7: In the Shrine of the Heart is an overview of various Uzbek and Tajik singer-songwriters who draw from a legacy of urban folk traditions in the towns of Bukhara, Samarkand, Tashkent, Qoqand and Khiva. From vocal love ballads and spiritual devotion songs to instrumental pieces, the tracks defy easy genre descriptions and cover a wide range of emotions and textures. Depending on each performer's mix of influences, the melodies can be composed of indigenous tones based on Asiatic scales, or may result from studies in formal European composition—not to mention subtle mixtures of both. Only native speakers or expert ethnomusicologists would be able to unravel which songs pair ancient melodies with newly written lyrics, or vice versa. Vocals are generated from ghazals and other classical poetry forms, written in Persian or Turkic languages as early as the 10th century, or as late as the 20th. Some of the most haunting pieces are performed by female singers, who decorate the melodies with melismatic ornamentation, accompanied by the lonesome sound of the two-stringed dutar lute.

Volume 8: Rainbow is divided into two sections that find unique Central Asian ensembles in collaborations with the famed Kronos Quartet. The first is a collection of songs with master singer/percussionist Alim Qasimov of Azerbaijan and his ensemble. Led by his daf frame drum and ecstatic vocals, the group explores Qasimov's mugham song tradition, in a combination of notation and improvisation that is not unlike jazz. Many of the compositions begin with a kind of drone that eventually progresses into sophisticated counterpoint, as Kronos provides shading to Qasimov's uncanny vocalizations. Sweeping melodic lines are molded into moments of extreme tension and release, with the tar and kamancha string instruments adding a mysterious twang that sweetens their Western counterparts.

The second chapter of this volume finds Kronos working with composer Homayun Sakhi, a virtuoso of the Afghan rubab. Sakhi's multi-section piece "Rainbow" ("Rangin Kaman" in Persian) incorporates melodic elements that represent various regions of Afghanistan, with tabla player Salar Nader and Uzbek doyra frame drummer Abbos Kosimov tracking the changes with specific rhythms from each province. Like Duke Ellington, Sakhi wrote the piece with each of the players in mind, making additional changes throughout the rehearsal process to match the singular abilities of the Kronos Quartet. The resulting half-hour performance is intense, as the musicians achieve true integration and create a new whole from their divergent traditions.

Different kinds of cross-cultural collaboration can be heard on the electric summit meeting of master musicians from Afghanistan, India and Tajikistan on Volume 9: In the Footsteps of Babur. Taking their cue from the legacy of the Mughal Empire, which united disparate cultures across Central Asia beginning in the late 15th century, a revolving line-up of players engage in reconnecting historical links through music. Various configurations are represented, with "Raga Kirwani" standing out as a highlight for the bracing interplay of a power trio featuring Homayun Sakhi on Afghan rubab, Salar Nader on tabla and Rahul Sharma on the santur, a kind of hammered dulcimer dating to ancient Persia. The final two songs on the collection are also notable for fusing Indian traditions with the music of Badakhshan, a region that bridges northern Afghanistan and southern Tajikistan, and feature the area's native Mukhtor Muborakqadomov on the enchanting setar, a long-necked fretted lute.

The accompanying DVDs on each volume track the progress of these performances with documentaries and other audio-visual material, covering everything from early conceptual frameworks for the collaborations, through the resulting rehearsals, recording sessions and live gigs. An introductory documentary, Music of Central Asia and the Aga Khan Music Initiative, is included on all of the volumes, as are helpful maps, interactive instrument glossaries and illuminating interviews. An intriguing focal point for the whole series is contained on Volume 8, with footage of the Kronos Quartet/Alim Qasimov Ensemble sessions. Their triumphant concert performance is capped by an interview in which Qasimov states, "I think we have planted a tree, and now we have to work to make it grow and bear fruit." This important insider's view shows just how seemingly disparate traditions can become intertwined more closely, while pointing the way towards the globalized future of the Central Asian diaspora.

Volume 7: In the Shrine of the Heart—Popular Classics from Bukhara and Beyond

Volume 9: In the Footsteps of Babur—Musical Encounters from the Lands of the Mughals