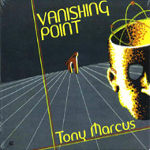 There are two ways to look at San Francisco-based guitarist-singer-song-writer Tony Marcus. The first is in the light of which guitarist-singer-songwriter he most closely resembles, Antonio Carlos Jobim; he could arguably be called the American Jobim, in fact. The second way is as a musical sommelier, one who knows music and all of the art that exists around it. Marcus is like Jobim in that his composing skills are superb, and he possesses the ability to express using different musical languages. As a lyricist, Marcus tends to be too smart (rhyming "maelstrom" with "Hails from") which is part of his charm. His sharp intelligence is self-deprecating and amiable.

As a musical sommelier, Marcus goes from the early 1920s style of "Lost World" to Le Hot Club du Paris on "That Summer" to 1970s balladry on "April 18, 1906." He prefers older styles as vehicles for his piquant lyrics and seasoned and wonderful voice. And speaking of that voice, Marcus' vocal talent is every bit a natural wonder as Rod Stewart's voice. Marcus' voice is more unique than pretty, reedy and attractive in that imperfect way that makes for good narrators and singers. Think of a more refined Tom Waits crossed with Randy Newman... yes, that might be close.

The music on this recording is colored broadly by Nova Devonie's accordion, giving a hint of Eastern Europe. Against this faraway backdrop, Marcus knits in Caribbean, New Orleans, Chicago, and, of course, San Francisco into his music. Highlights are the light-hearted "Miss Pizazz" and sharp "The Odd Get Even." The centerpiece of the album is the Great San Francisco Earthquake ballad "April 18, 1906," where Marcus shows Gordon Lightfoot should have cast "The Wreck of the Edmund Fitzgerald." This is music that requires attention for full appreciation and is amply rewarded for this attention.