By DOUG COLLETTE
February 17, 2018
Sign in to view read count 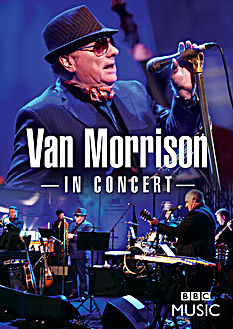 The video equivalent of last fall's pair of albums, Versatile (Legacy, 2017) and Roll with the Punches (Caroline, 2017), Van Morrison's In Concert is comprised of not just one, but two concerts. The main feature was recorded for the BBC Music In Concert Series in 2016, while Up On Cypress Avenue is a slightly shorter hour-long bonus (sic) commemorating the Belfast cowboy's seventieth birthday (hence its introductory historical intro?), recorded the year prior in the general locale to which the title refers.

Each setlist is almost wholly only different from the other, rendered with a slightly different lineup of musicians (Robbie Ruggiero is at the drum kit on the secondary portion instead of Dez Clough). Both polished presentations (in DVD, Blu-ray and digital video, but no audio CD) showcase an extremely well-practiced band captured on an array of blues and jazz-oriented material plus a smattering of the Irish soulman's original material, well-known ("Brown Eyed Girl," "Wild Night") and otherwise ("Cleaning Windows").

Audience response is proportionate to the song selection, even if it doesn't exactly correlate, as on "Let It Rhyme," from Keep Me Singing (Caroline, 2016), where he and vocalist/percussionist Dana Masters, engage in some lively interplay. Sir Van's rather stolid stage presence belies the emotion in his voice when he's singing: a detached demeanor and somewhat stiff body language render him magnetic via mystery begging the question of how can he summon up such depth of feeling with no overt physical manifestation of same? Wearing dark glasses hardly makes him more forthcoming, though like the dark suit (getup similar to that worn by the whole band) and his now trademark fedora, he at least looks as sharp as the music sounds.

As is also apparent sometimes here, Van seems more than a little begrudging in his offerings here, obviously so on older material such as "Here Comes the Night" And there's the slightest hint of self-indulgence when he plays the saxophone, an admitted love of his, simply because his instrumentalizing, as on display during "Magic Time," doesn't quite compare to the ingenuity or force of his vocals. No question there's a linear logic in his solo there though, as is also the case with his harmonica playing on "Baby Please Don't Go"/"Don't Start Crying Now").

Morrison's backup band evinces a similarly pithy approach. However, the other prominent soloists, guitarist Dave Keary and keyboardist Paul Moran, don't have much opportunity to stretch out and display their chops, but that's a direct reflection of the tight, concise arrangements, as is the camera work and editing of director Janet Fraser Cook on the main feature and her counterpart Phil Jennings on its companion piece: technique is purely conventional, at least insofar as it neither adds nor detracts from the action, but rather frames it all in the best possible light (literally and figuratively).

Of course, that's in keeping with the spartan stage production which relies on the natural theater and drama of the players and singers in the midst of performing. Intentional or not, continuity becomes manifest within Van Morrison In Concert. The relatively cozy BBC Radio space adds more than just a modicum of welcome warmth, as does the semi-circular alignment of the band and its equipment on the stage. Likewise, the sylvan setting of the twelve-song al fresco performance is inviting, but the audience, like the artist, retains a somewhat reserved mien, seemingly curious as much as anything else.

Oddly, there is no extensive exposition detailing the dual nature of this title, either on the artist's official site or that of the label. And more's the pity in that regard, since taken as a whole, this package, a purposeful self-portrait in song like its aforementioned audio counterparts, represents a crystal-clear depiction of contemporary Van Morrison.