Garry Dial / Terry Roche: Us An' Them

By WOODROW WILKINS
December 31, 2008
Sign in to view read count 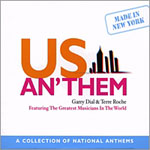 The concept is very simple. We're "us" and they're "them." But exactly who "we" and "they" are is the idea and concept of thought behind a 17-year process by pianist Garry Dial and vocalist Terre Roche.

The United States of America is a collection of peoples from various nationalities, including immigrants and descendants of immigrants. Us an' Them sends the not-so-subtle message that we're all "us." This collection of 16 national anthems features Dial and Roche with several musicians who represent the countries whose anthems are included. For simplicity, the tracks are titled by country and not by song.

Guitarist Romero Lubambo is among the cast of Brazilians who participate on the first song, "Brazil." Barbara Mendes sings lead while Anne Drummond contributes a flute solo. With Oswaldo Amorim on bass and Mauro Refosco on percussion, this anthem is ripe for the samba. Roche leads on the following song which travels to Europe and the anthem of "France." Dial's high-speed piano, combined with Jay Anderson's bass and Jeff Hirshfield's drums, inject a strong jazz flavor to this anthem, while Scott Winholt plays a muted trumpet.

One of the livelier pieces is "Jamaica." Patrick Gordon leads on this reggae track, with a supporting cast including Gary Haase on bass, guitar and keyboard, Buddy Williams on drums, David Mann on saxophone and Barry Danielian on trumpet.

Roche, unaccompanied, sings and plays guitar on "USA," which closes out the set. Other anthems represented include "Guinea," "Tibet," "Greenland," "Esperanto" and "Norway." The collection is an eclectic mix of jazz, folk and styles representative of the various cultures.